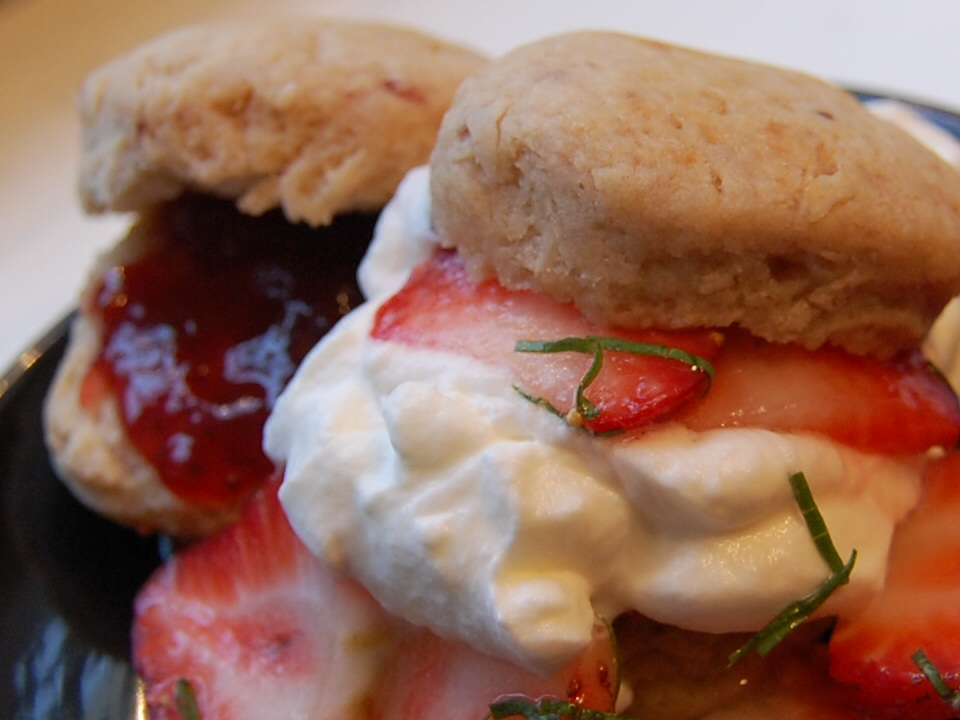 Things come together at different times.  It’s been a while since my last rice cooker recipe, but not for the lack of trying.  Frustration builds when you are focused on getting a specific result rather than enjoying the process along the way.  I rarely throw out food and I don’t give out food that’s less than satisfactory.  That leaves me with…wider me.

Then recently this came about as I was thinking of doing something with strawberries.  I tried Paula Deen’s biscuit recipe, meant to be baked in the oven, in my rice cooker but it looked too pale even when it’s fully cooked.  So I added whole wheat flour and a spoonful of strawberry jam.  The result doesn’t scream out strawberry-ness, but it comes with fun bites of strawberry seeds, a bit of added sweetness, and a light toasty shade out of the rice cooker.  Of course, still with the flakey texture biscuits, also often referred to as scones, should have. 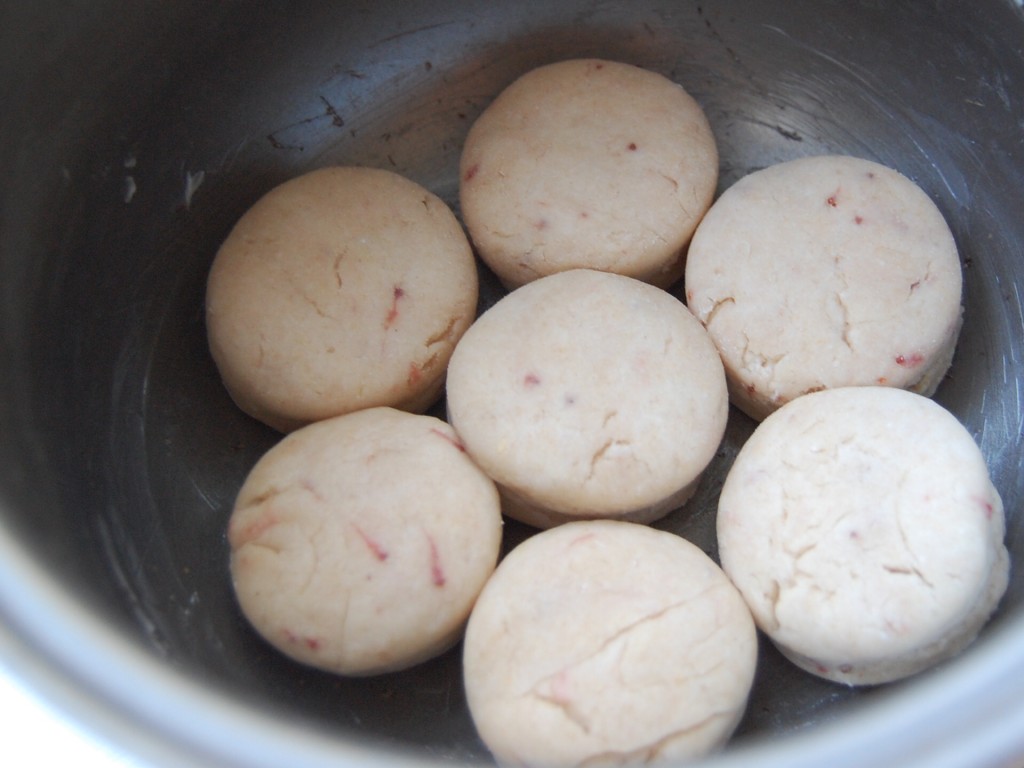 Basically, after mixing some simple ingredients together and cutting out the biscuits, it’s pressing the ‘Cook’ button 3 times. After the second time, it looked like it was almost ready, and I just went for one more time to be safe.  So you might be done after the second time depending on the kind of rice cooker you have.

This recipe makes 12-14 biscuits that are 2 inches in diameter and 0.8 inch in height (taller after cooking).  Why so mini?  I had to size it for my rice cooker and I also happened to find a shot glass that worked well as a biscuit mold.

2. With your fingers, mix in 4 tablespoons (TBSP) of chilled butter cut in small pieces and 1 TBSP of strawberry jam until the mixture looks like cornmeal.

3. Pour 1/4 C of milk to the mix and start forming a dough.  You might need a little more milk until the mix comes together without over-kneading it.

4. On a clean, lightly floured surface, flatten the dough to a desired height.

5. Cut the biscuits with a mold.  Reshape the dough scrap and punch out a few more biscuits.

8. After the second time, take out the bowl and gently shake the bowl to let the biscuits slide out.  Place the biscuits upside down back in the rice cooker bowl.

10. Cool the biscuits on the rack.

You can put some jam on the biscuits to go with your tea, or freeze in a plastic bag for later (only need to microwave for 20 seconds to eat).

Or make a cute and quick version of strawberry shortcakes.  Fresh strawberries and whipped cream in between the biscuits will do.  If you want to dress up the strawberries a bit, let some sliced strawberries sit in balsamic vinegar and chopped tarragon, the combination we found surprisingly tasty when we tried this during the first class of the pastry module in culinary school.  I didn’t have balsamic vinegar at home this time, but…I found rum.

Slice some strawberries, then soak them in 2 TBSP of rum, 1 TBSP of honey, and 1/2 tsp of chopped tarragon for 30 minutes before constructing a strawberry shortcake.

And it looks like a great day to enjoy a strawberry shortcake in New York!