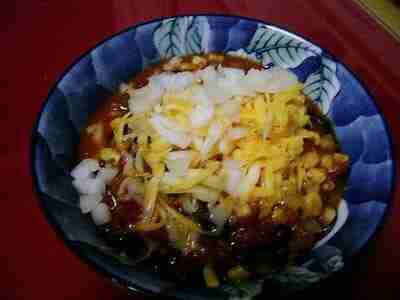 Man, chili does have its fanatics. When Alton Brown did his show on chili, he got swamped with angry emails from chili “purists” who were offended by his chili making techniques.

Yet seriously, anyone who is a purist about a great blue collar dish–whether it’s chili, kimchi jjigae, or cassoulet–is an idiot. Chili technique was not handed to Moses from Yahweh on Mt. Sinai. The first pot was not cooked over a burning bush. And God did not give Joseph Smith magic glasses to read His Holy Chili Recipe.

The truth is, like any great proletarian food, chili was improvised to feed hungry people. And it will continue to be improvised and reinvented. Saying that chili can only be made from beef chunks with no beans and blah, blah, blah shows that you have a humorless and joyless approach to food.

I’ve been developing my own techniques over the years to create what I think is the perfect bowl of red. It involved smoked patty sausage, three types of beans, microbrew beer–it was great.

In Korea, the ingredients are a little harder to come by, and when you find them, they’re too pricey to make it worth it.

The main flavoring agent in chili, though, is not a common E-Mart item. Cumin. Cumin can be found at Costco (remember, cheating) and the international stores in Itaewon. But you may not know that you can also get whole and ground cumin seeds at Chinese groceries. There’s a great Chinese grocery near Bongcheon Station (near Seoul University) that I still frequent when in town. They carry many spices, exotic goods, cilantro, and lots of Tsingtao beer.

An aside–Tsingtao beer is the oldest beer in east Asia. Why? Tsingtao was the only east Asian colonial possession of Germany at the end of the 19th century. It wasn’t part of Germany for long. Yet Germans occupied it long enough to build Asia’s first beer brewery.

Now, back to making chili.

If you can get your hands on some cumin, the rest is easy.

Understand, my tirade against chili dogma is a set up. I break all the rules here. For one thing, I don’t use beef. It’s too dang expensive to justify putting in chili. Instead, I get my butcher to grind some fresh pork, moksal. I love pork, anyway. And it works in chili.

Texas chili powder is also a hard find. That’s no problem. You can replace that with Korean chili powder (gochugaru) and herbs such as oregano. In fact, gochugaru gives chili an interesting sweet aromatic tinge that Texan chili powder doesn’t possess.

So, I have the basic ingredients. 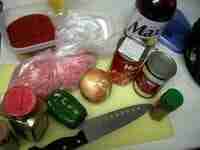 Now, again, this is what I like to put in chili. Add or subtract according to your preferences. 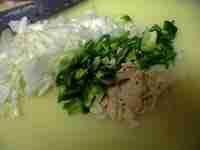 I start by chopping the onion, green pepper, and garlic. 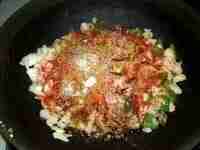 I cook them on medium heat with the pork, salt, sugar, cumin, gochugaru, and oregano. There’s no rush in this step. I like to cook it slowly. 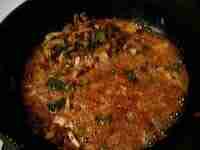 When the meat’s cooked all the way through, I toss in the beer and turn it to high. I let it boil down a bit so that the flavor of the beer penetrates the meat and veggies. 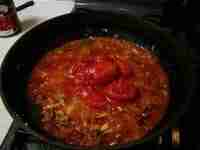 I then add the can of whole tomatoes, using a wooden spoon to crush and break down the tomatoes in the pan. More boiling. 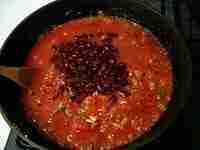 Then come the beans. Again, this is optional. I like them. I only have red kidney beans here. In my old recipe, I used black beans and garbanzo beans. 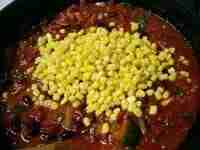 Then comes the corn, which I know breaks every rule in the book. I did this as an experiment once a long time ago, and I’ve grown to like the added crunch and sweetness. Besides, what is more southwestern than corn?

After everything’s cooked through, serve with garnishes. In this picture, I’ve added chopped onion and shredded cheddar cheese. In the past, I’ve gone all out, including sour cream, jalapenos, habanero sauce, fresh cilantro, and corn chips. This chili is good and sticks to your ribs.

Heck, why not indulge in another taste from home… 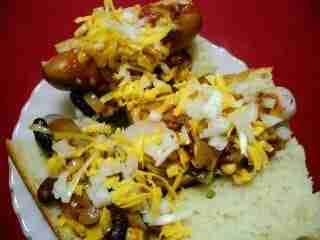