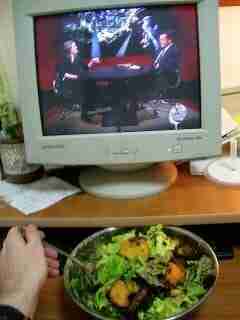 I got the news about North Korea from the Marmot’s Hole very early. Sort of not surprised. A little worried. But before I came to Korea and since then, I have given much thought to the possibility of the impossibility. I’ve had a good time to think about it, so I’m not shocked completely.

Nonetheless, I decided to make some comfort food. A Fried Chicken Salad.

This came about when I worked as a cook for Yucatan Sam’s, a little Tex-Mex place in Fairhope, Alabama, that no longer exists. The owner’s wife regularly asked for this fried chicken salad we had on the menu for lunch. I wondered why anyone would eat a salad for a meal. And why would anyone ruin the positive effects of a salad by putting fried chicken in it?

I had gone through and eaten most everything on the menu after a few months. I had even started experimenting with new recipes to add to the menu. So I decided to make the fried chicken salad for myself.

It ended up being one of my favorite things on the menu. And it’s something you can make easily in Korea.

Lettuce
Grab whatever fresh greens you like from the lettuce counter at the store. Make sure you clean them, though. One of the things I like about Korean grocery stores is how au naturel produce is. Carrots come with mud caked on them, as do ginger roots. They haven’t been over processed. They’ve basically have gone from the dirt to the produce aisle. So wash the lettuce and other veggies you want to add.

Onion
Just a single white onion. I like to shave it thin in my slicer using a fork stuck at the very end to protect my hand from the razor blade.

Fried Chicken
I like to make this when I have leftover fried chicken in the house. Other times, I just buy a bag of frozen chicken nuggets. I fry them in some oil and drain them for the salad. Throw some seasoning on them when they come out of the oil. Whatever you feel like adding (cinnamon not suggested, though).

Croutons
Don’t buy the bagged toasted garlic baguettes at the Korean bakery. I made the mistake during Foreigner Chuseok and came out with sugary garlic croutons. Nasty on salad. It’s best to make your own.

Cut up some bread you have around the house. A baguette is perfect. Fry the cubes with some butter and chopped garlic until the bread has absorbed it all. Then put it in the toaster oven until they turn out like croutons.

Assembly
Throw everything together in a big bowl and top it off with some cheese, if you have any. I usually use honey mustard as a dressing because that’s how we did it at Yucatan’s.

So, if it’s the end of the world as we know it, I’m just gonna sit down with my Fried Chicken Salad and watch The Colbert Report.