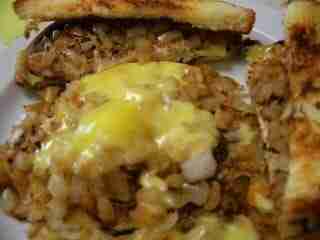 I couldn’t resist it much longer. I needed a grease fix. Korean food is great and healthy. Sometimes it’s too healthy.

There are times when I really miss Waffle House, or the “Awful Waffle,” as we used to call it. It’s one of those places that intimidates those who’ve never ventured inside but is comforting to those who have made the journey.

A waffle maker I still have yet to acquire. So I made do with the chicken melt. I had done this in the past, but my hashbrowns had always turned out bad — limp, soggy, sometimes a little green. 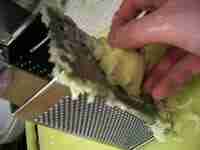 I’ve since learned that after you grate them, you have to leech the starch out of them, like my Perfect French Fries technique. In this case, I drown the grated potatoes in ice cold water with a little salt in a bowl in the refrigerator for two hours or so. While I was waiting, I fried some diced onions. 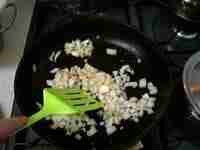 After draining the potatoes, I put them in a frying pan with butter over medium heat. 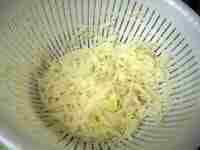 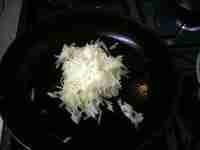 After shaping them, I just left them there. Yes, leave them for around ten minutes or so. They won’t crisp up if you move them around like a potato stir-fry. 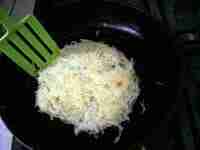 I didn’t like just standing there doing nothing, so I added a pat of butter and some black pepper. 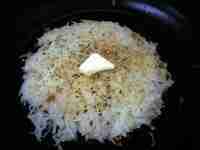 I flipped them over, and they were nice and brown (hence “hashbrowns“). 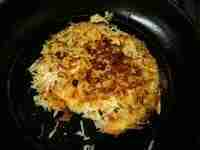 Smothered them in sauteed onions and covered them with cheese. 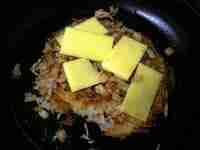 I covered the pan to let the cheese melt. In the meantime, I seasoned a chicken breast with salt and lots of pepper. While my hashbrowns were sitting on the plate, I sauteed the chicken in butter. 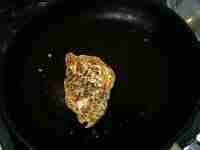 Setting the chicken aside, I toasted the bread according to a technique I learned as a short order cook. One slice, one side first. 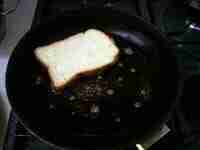 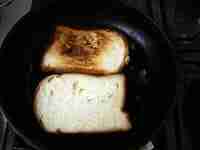 Put the cheese on the toasted side. 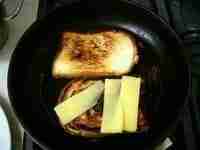 Then the onions and chicken. 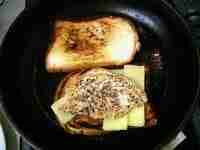 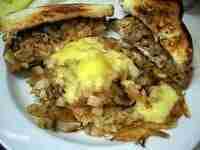