I’m not sure what to make of this one.

Honestly, I have grown to like veggie burgers. Veggie burger technology, coming from the chemical geniuses in New Jersey, have made them not only tastier, but more texturally pleasing.

I’ve also met a good many vegetarians in Korea from the West. It’s possible to eat vegetarian in Korea. In fact, Korea has some of the best vegetarian food in the world. Yet there aren’t many non-Korean vegetarian alternatives available.

I caught a show, Chef at Home, where Chef Michael Smith came up with an enticing veggie burger recipe. His goal was to make them full of non-animal protein yet make them taste meaty. His secrets were Japanese mushrooms and Japanese miso paste.

Immediately, it occured to me that using Korean ingredients would make them taste even meatier — or stronger, at least.

I started by gathering all the ingredients.
Included were some Korean mushrooms, 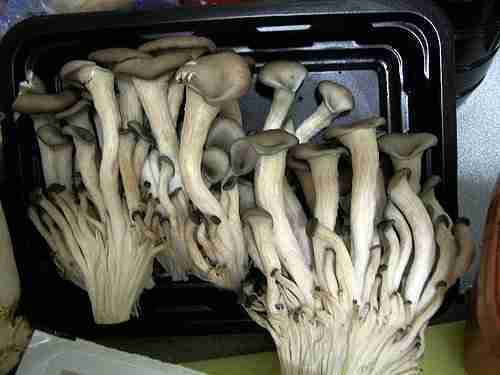 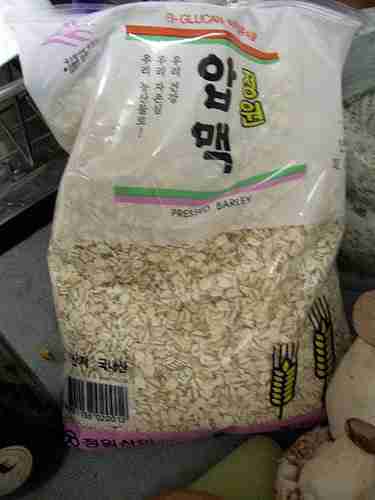 rosemary and thyme from my “garden,” red Korean peppers, and Korean doenjang paste (the “stinky miso”).

In fact, I’ll break my usual convention and list all the ingredients at once.

I started by slowly sweating the mushrooms, onions, red peppers, and garlic in olive oil, seasoned with black pepper, a little bit of salt, and the herbs.

I slowly cooked the mixture down until the liquid was almost gone. At that point, it tasted pretty good, like Thanksgiving stuffing. Maybe I could serve that as it was.

I then added the barley, rice, water, a quick pour of soy sauce, and a bit of the stout I was drinking.

I put a lid on it and slowly simmered it until the rice and barley had softened. It still looked, smelled, and tasted pretty good.

In a blender I pureed the tofu, eggs, and doenjang. I tried adding the breadcrumbs, but this blender just ain’t that powerful. I added it instead to the rice mixture.

When the rice mixture had cooled, I pureed it and mixed it with the breadcrumbs and tofu mixture.

Then I rolled them,

patted them, and put them in the fridge to firm up a bit.

After an hour or so, I pan fried them in olive oil and toasted some split butter rolls. Since I’m not anything near being a vegetarian, I threw on some sharp cheddar cheese.

I dressed them in onions and mustard, similar to small hamburgers made in certain establishments.

Honestly, the hamburgers tasted pretty good when I ate them. But still, they weren’t something I wanted to eat again. That’s too bad since I made a good many of them (anyone out there want some extra frozen veggie burger patties).

I’m thinking that maybe I put in too much tofu, or the tofu was not necessary at all. It felt like something was missing — like meat. Maybe someone out there could help me fix this recipe. I never claim to be an expert in all this. I’m just bumping my way through a kitchen in Korea.