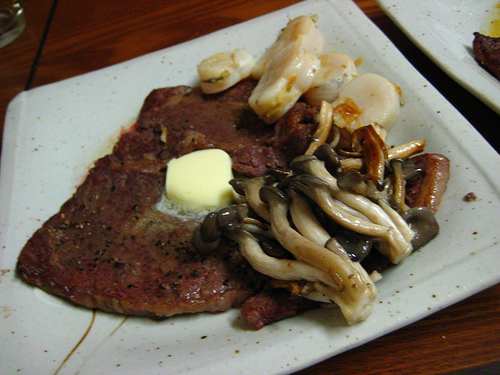 Today was White Day.  Eun Jeong’s not the romantic type.  She hates silly gifts given on manufactured holidays.  But I’m an incurable romantic.  It’s also her birthday weekend.  So I pushed her to let me cook for her tonight.  I brought up that she had never had a home cooked steak dinner.

I had been keeping my eye on beef prices since American beef was allowed back in the market.  (BTW–hilarious how people were scarfing down free samples of American beef at E-Mart today, considering the attitude last summer.)

She wanted simple, and I promised simple.  She loves my salads, which are greens, shaved onions and tomatoes with a basic homemade balsamic vinaigrette.  She didn’t need anything else.

We went to E-Mart to pick up the steaks.  We also found that Ki Jogae 키조개 were on sale.  Therese already talked about them on her blog, and they’re wonderful.  They are these giant scallops that I’ve only seen in Korea.  In fact, they may be really rare because I remember Andrew Zimmern going nuts over them at the fish market when taping the upcoming Korea episode of Bizarre Foods.  In English, they translate as pen shell, but really, since they seem to be a type of indigenous Korean scallop, let’s just call them by the Korean name–Ki Jogae.

We also got some steaks, which were cut too thinly for my liking, but Korean consumers like meats that cook quickly and thoroughly, i.e., no room for medium rare steaks.  Meh.  No matter.  I’m happy that beef is starting to come down to a more reasonable level price wise.  We got four steaks for the price of one Korean steak.

Being her birthday, the wine choice was a semi-sweet wine from Spain.  There’s been an overstock of wine from poor Valentine’s Day sales, so a lot of them are really marked down right now. 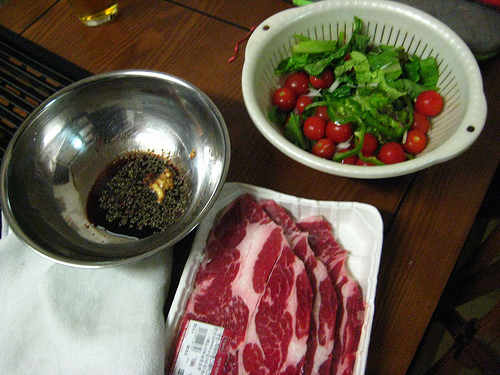 I decided to make her a classic Surf ‘n’ Turf.  I also made her a little treat she had been pining for since she left Canada six years ago–rice pudding.  I used the baked recipe from Therese’s site.

The rest of the meal was very simple.  It was just a matter of coordination–making sure dishes were timed to come out properly.  I started by washing and prepping the salad, leaving the vinaigrette to the last minute. 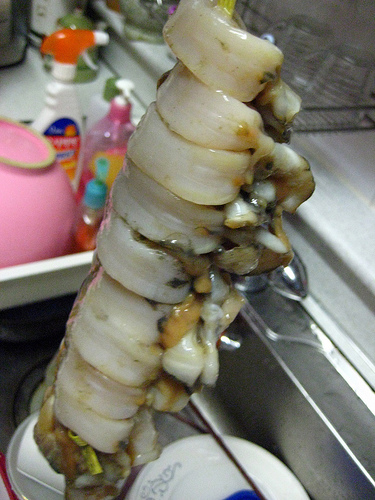 I cleaned the Ki Jogae.  They come in strings of around eight or ten, complete with interesting innards.  Eun Jeong found the innards disgusting, so I trimmed them after I seasoned them. 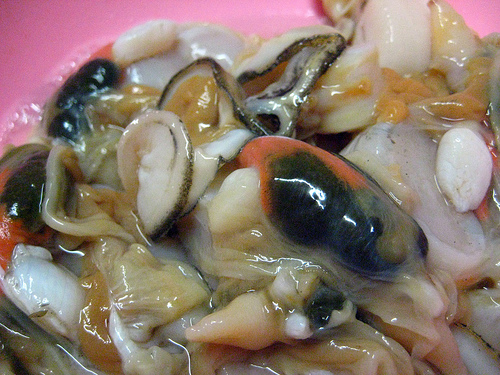 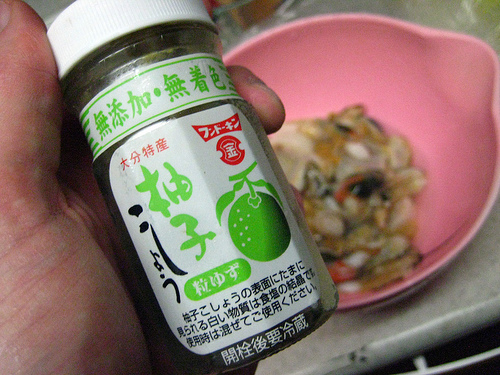 The seasoning was this little jar of yuzu seasoning salt that I got from Japan a few years ago.  That’s great stuff. 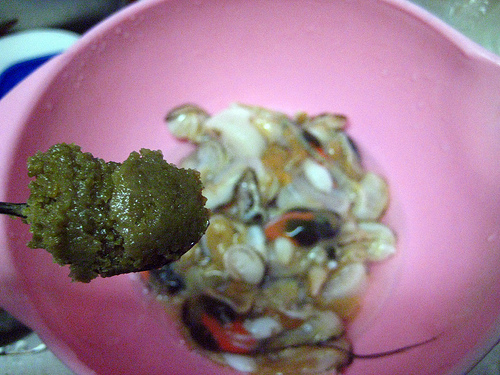 A little goes a long way.

I personally couldn’t let gorgeous roe go to waste, so I cooked them with a good dose of mirim and pureed them into a sauce.  The good news was the sauce tasted heavenly–like foie gras of the sea.  The bad news was that it was gritty with sand residue.  I had to toss it out. 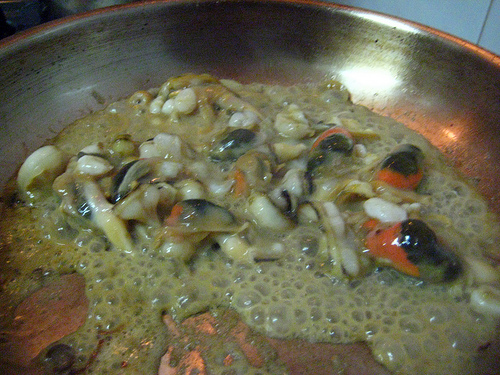 Didn’t matter.  I had already made a little light sauce using a third cup of mirim, a tablespoon of soy sauce, half a teaspoon of ground ginger, and a teaspoon of sesame oil.  This was crack sauce.  Way too freakin’ addictive.

I also sauteed some mushrooms we found on sale.  I told Eun Jeong I was cooking the first thing I learned how to cook as a child–mushrooms sauteed in butter.  She was playfully suspicious.

I had the mushrooms sauteeing on the stove as I simply seasoned the steaks with sea salt and pepper cracked in the mortar.  I threw the steaks under the broiler and cooked them to order (mine medium rare, hers well done).  I threw a pat of butter on each steak as they left the broiler and promptly tossed the Ki Jogae under the flame. 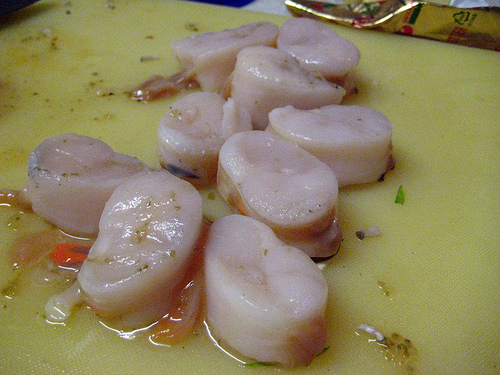 As the Ki Jogae cooked, I finished making the vinaigrette and tossed it with the salad.  I made sure to leave the Ki Jogae a little rare in the middle for tenderness. 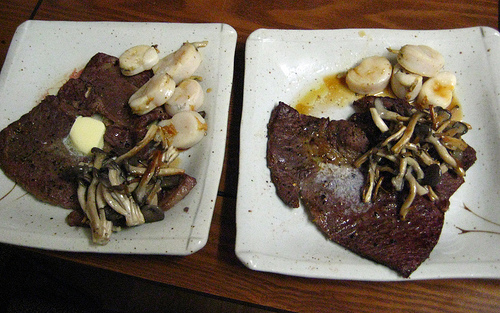 Eun Jeong loved every little bit.  She said I had redeemed myself in the kitchen.  She actually started eating the crack sauce with a spoon.

I personally think the Ki Jogae still suffer from a bit of grittiness, but they are sweet and plump.  The steak, though thin, turned out fine.