A Journey in home-made barbecue 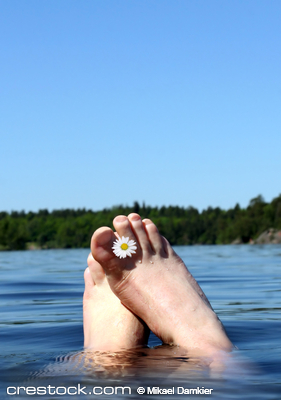 My contract finishes this week and I found myself at the end of the year with some vacation time left, so this week I’m off all week, trying to get some rest.

…only it hasn’t been very restful so far, as I tend to keep myself pretty busy. Feels like I’ve been running all over town running errands. Anyway, lately, especially with the weather warming up, I’ve been a little homesick for Kansas City (well, to be honest, I’ve been homesick for about the past 6 months to 1 year…), so I thought I’d have a taste of home by using some of my massive stock of BBQ sauce and rubs to make some barbecue.

At first, remembering a classic episode of Good Eats, I looked into building a cardboard box smoker (despite what he says in the video, you can totally smoke meat with the cardboard smoker, but you have to add something to catch the drippings so there’s no flare-ups, which would be very bad inside a cardboard box).

As I made my plans, I realized it might take a while to assemble the proper materials (I’ve since found out that wood chips can be bought at Hannam market), so I decided to make that a long-term project and, in the mean time, to keep it simple and slow cook a pork shoulder (Costco, ~25,000 won for ~1.2 kgs). I’ve done improvised slow-cooker bbq many times before, but this was my first time to do pork and to try and follow some sort of thought-out process rather than just making it up as I went along. 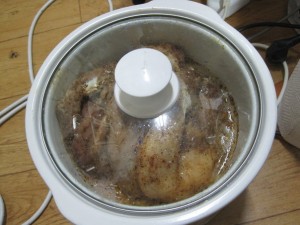 Now here’s a confession: I cheat. I cheat big time. I’ve got a store of rubs and sauces from my three favorite KC barbecue joints and I’m not ashamed to use them because a big part of if, for me, is getting a taste of home. I took the pork shoulder and covered it liberally with the Jack Stack rub. That being said, it doesn’t seem too difficult to make your own brine or rub, or even barbecue sauce. One of these days I might try it myself, but it would be purely an experiment, as I don’t really see how I could improve on the best of the best of Kansas City barbecue sauces (the rub I could understand though, as any pre-ground spices won’t be as fresh after sitting on a shelf for a while).

Based on some recipes I saw online, I put a bed of sliced onions in the base of the slow cooker before I added the shoulder, and then I added a can of beer (Max, specifically). It’s important to note that the meat does not need to be submerged in liquid, nor should it be, because the juices from the meat will come out during cooking. In fact, next time I do this I’ll skip the beer altogether, as it adds significant flavor, to the point of masking some of the flavor of the rub I think.

After ten hours of cooking on low, I woke up at 6am to take the shoulder out, drain the slow cooker, pull apart the pork with two forks, add about a cup of Jack Stack original sauce, then put it all back in the slow cooker for another hour. I intended to go back to sleep, but the hunger pains wouldn’t let me 😉 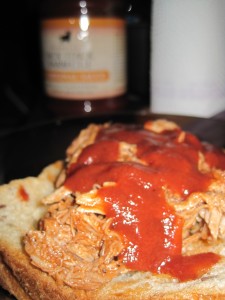 I used a single slice of whole wheat bread to make an open-faced sandwich and put a little sauce on top (being conservative with it as there was quite a bit of flavor added through the whole process). I didn’t have anything to garnish it with, but I might look into some cole slaw or beans for next tie.

The finished product was pretty darn good if I don’t say so myself. Using beer in the process tasted good, but I think it’s a trade-off and may be masking some of the rub’s flavors, not to mention the natural flavors of the meat. Still, most people probably wouldn’t notice. I’m looking forward to having plenty of meat left over for sandwiches through the weekend!

I’ll definitely be making this again.

Steve Ward has been living in Seoul for nearly five years now and has dabbled in many different hobbies and types of work in that time. SteveWard.TV is the homepage of his official online presence.