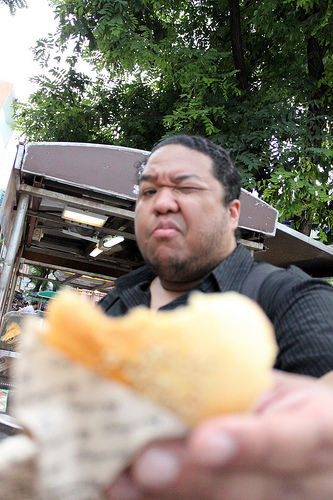 I’m posting about this because he said it was cool.

It hasn’t been announced much publicly on the K-blogosphere. Stalwart of the Korean bloggers, one of my mentors, and one of the pioneers of Korean street fashion photography, Michael Hurt (Yahae, Feetman Seoul, Metropolitician), suffered a stroke earlier this month after returning from a trip to America. It was a few days before he was discovered and taken to the hospital.

Talking to his mother, she said it may have been ironically a good thing that it took a while because it gave time for the blood to dissipate and be absorbed by his brain, so no surgery was necessary.

He only recently became awake enough to accept visitors, so I stopped by last night. He’s looking pretty darn good for someone who has been through what he’s been through. All his mental capacities are lucid and sharp. The left side of his face is not all there yet, resulting in a Billy Idol sneer when he talks. He also has very limited control of the left side of his body, but all the feeling is there.

Another big change is that his brother shaved his head. He’s looking a bit monastic now.

Mike’s mother is Korean and works in the cardiology section of a hospital in the U.S. But she’s admitted that being in a Korean hospital has been a bit of a culture shock. She has to go buy supplies that American hospitals usually have available in the rooms, like rubber gloves. Patients in Korean hospitals don’t really get much care. The families supply the meals. There’s little, if any, concept of bedside manner. And the lack of communication is astounding.

For example, they had trouble tapping a vein to get some blood. So a doctor set up a tap so that hospital workers could easily get blood when needed. That didn’t stop some person at 4 a.m. from sticking his foot to try to get more blood.

The positive side of the Korean hospital is the communal nature of it. Mike’s in a room with around seven other stroke patients. Their families are there too. When a patient gets up to walk or does some skill for the first time, the entire room breaks out into applause. The families share food. I was privileged enough to help Mike down his first piece of fried chicken since his stroke. Yes, I know that it’s not the healthiest of foods, but sometimes a little happy helps the healing. Some of the other families helped fashion a rope at the foot of his bed to help him sit up. And as I was leaving, some of the ladies were joining his mother in slapping and massaging Mike’s back.

Mike’s gonna have to return to the States indefinitely to recover. The doctors are positive about his recovery. But, of course, there will have to be a lot of changes. In the meantime, we’re looking for a home for his two very sweet and docile cats.