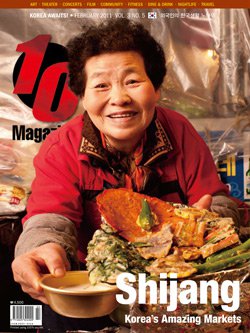 I’m a little late in sharing this, but there are still many issues out there. This month’s issue of 10 Magazine is the most food heavy (food heaviest?) edition since last year’s brunch feature. It’s been a few months in the works, combining the talents and efforts of some of the best food bloggers and writers in Korea, including the feature debut of Danny O’Sullivan, known as Street Foodie.