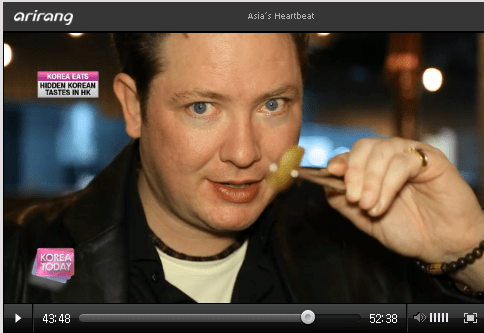 Starting a few weeks ago, I took over the “Korea Eats” segment on Arirang’s morning show, “Korea Today.” It’s my first regular live TV gig. In the ’90s, I was used to being the person being behind the camera, working at a news station as a director, cameraman, graphics, and audio operator. It’s weird being in front of the camera on live TV. I also gotta get up around 4 a.m. on Fridays and drive into Seoul.

Yes, my segment is on Fridays. I introduce restaurants, I do cooking segments. Some of them are pre-recorded, and sometimes I’ll cook live in the studio (WATCH OUT!!). Our first two segments (12/19, 12/26) were in Hong Kong.

Arirang no longer posts on YouTube, and I haven’t found an embedable way to post vids. So the best I can do is this:

Click on the segments that occur on Fridays. I’m at the end of the show, usually starting around 41:00.