Eating on the Green Line–Supplement to SEOUL Magazine article

My latest column hit SEOUL Magazine this month. For a couple of months now, I have been given two pages instead of one and have been asked to include more specific places to go. It’s a bit daunting because I work until 8:30 during the week, Seoul is thirty minutes away by subway, and the subways close around midnight. So it’s usually not worth it to go into town to try out a new restaurant. And when we have done it, we have hit disappointments almost every time. Usually the restaurants we research give the wrong directions are have gone out of business. Some of the places we find are just too awful to write about in a tourism magazine.

I’ve been writing for the magazine for almost a year now, and I’m finding my voice. I’m also seeing how much I can get away with–or really, I’m seeing how much of my personal style I can put into the articles. I throw in a few jabs. I talked about how Haemultang and Agu Jjim ruin the delicate taste of their ingredients last month. This month, I trashed some of the specialties of a Greek restaurant I featured. Granted, there were some really good items on the menu that I recommended, but I also talked about what to avoid, specifically the fruit souvlaki covered in dried oregano, whose picture, funnily enough, graced the heading of the article. 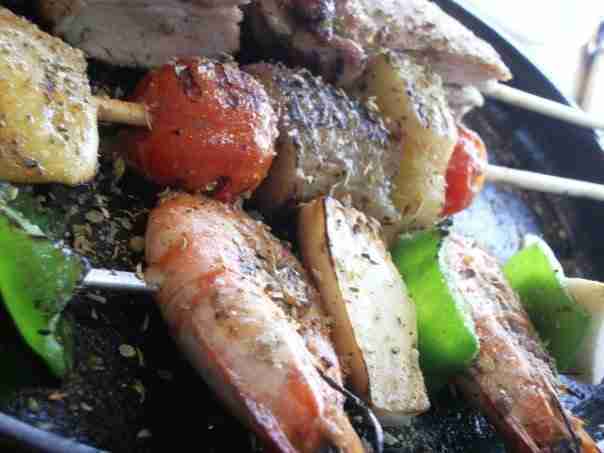 This article was one of the hardest I’ve ever researched. Poor Eun Jeong came out with me on cold January and February weekends to try all of this. I also used her as a second opinion source, as I can have a fucked up palate. 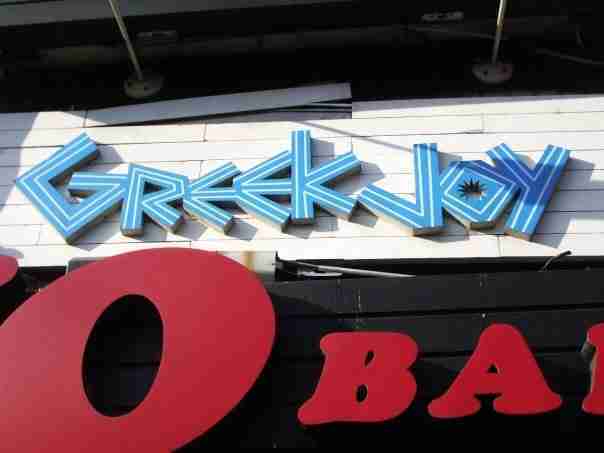 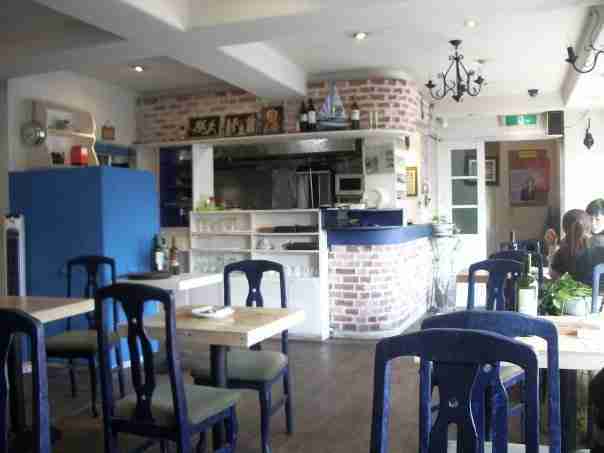 A little casual Greek joint. The Johnny Cash on the speakers was a bit surreal. I liked the blue theme they had going on. They are divided into a casual restaurant and a more formal restaurant upstairs. The souvlaki sucked, but here are pics. 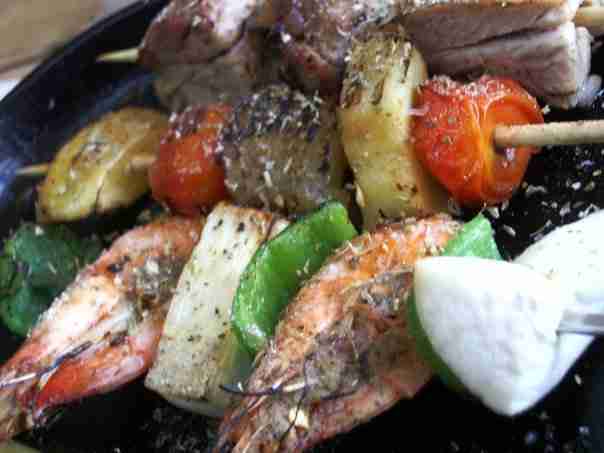 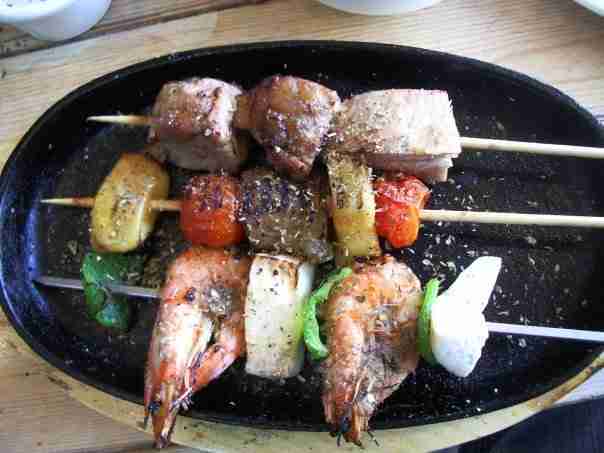 The Avgolemeno was pretty good. Lemony. 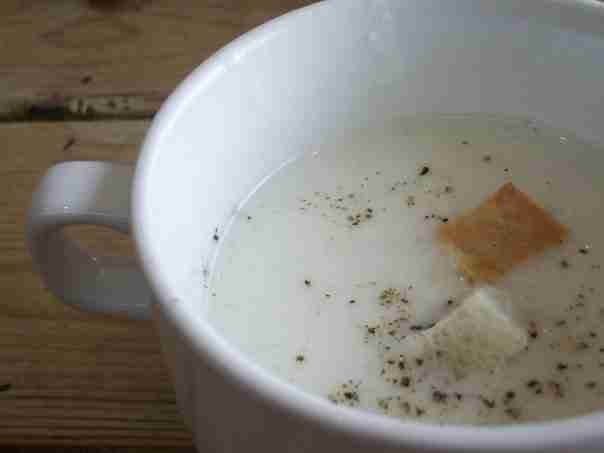 We also had an adequate Greek Salad. I particularly like the Pastitsio. 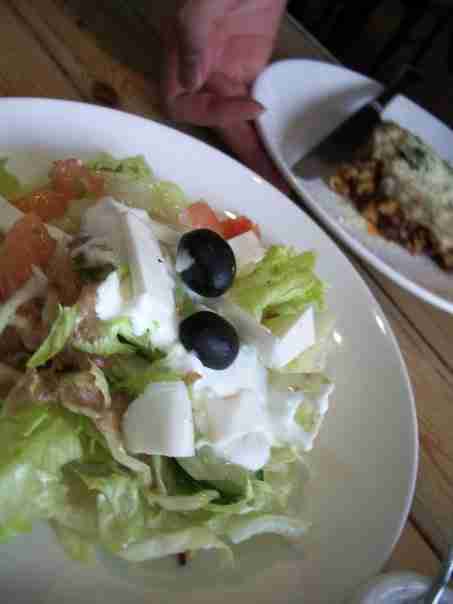 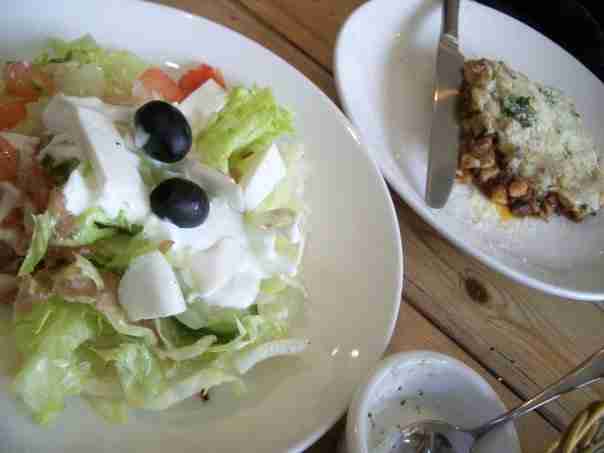 The one thing we both agreed was good was the Gyro. Real pita bread, decent fillings and a refreshing yogurt sauce. 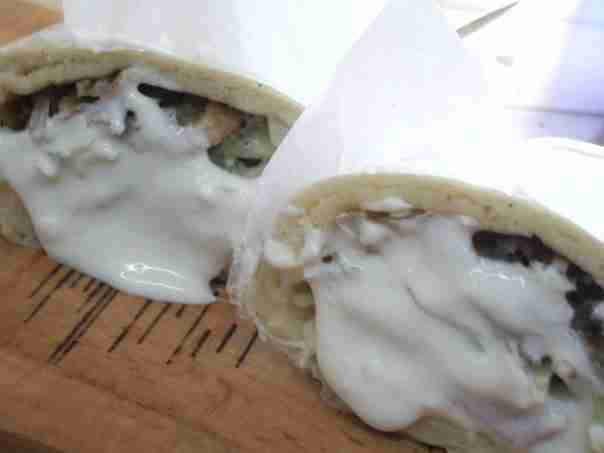 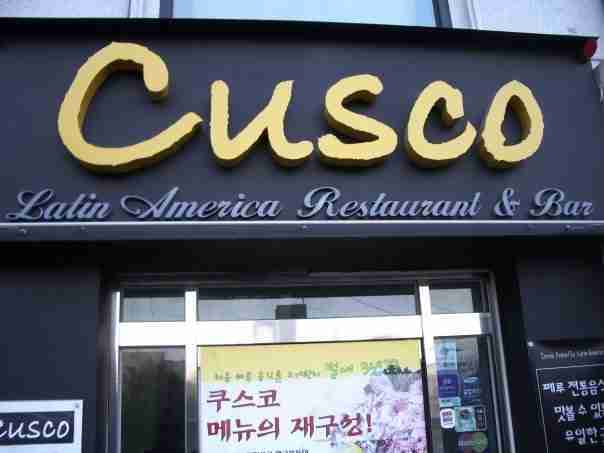 We almost didn’t go in because the picture ads in front looked like the typical Korean fusion crap–shredded cabbage and squeeze bottle honey mustard. 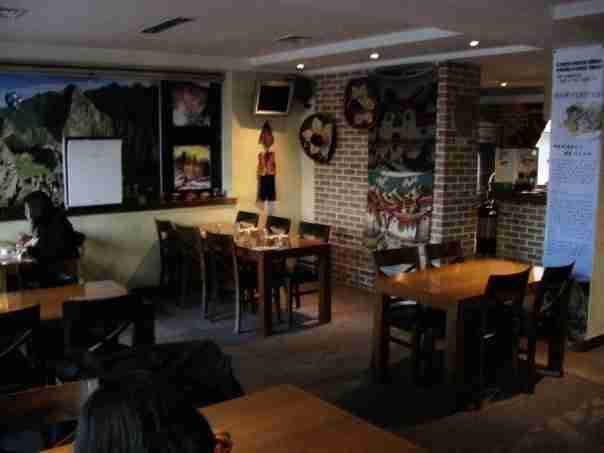 The interior was moody with bric-a-brac that looked like it came from the Peruvian Tourism Bureau. They also had free coffee with a Peruvian cake (3,000 won per slice) in one corner. We had just gotten through eating all that food at Greek Joy. The menu was all in Spanish and Korean. There were a few interesting items I wanted to try, but their specialty was Ceviche. I had to get that. They also promoted their Maca Sours. 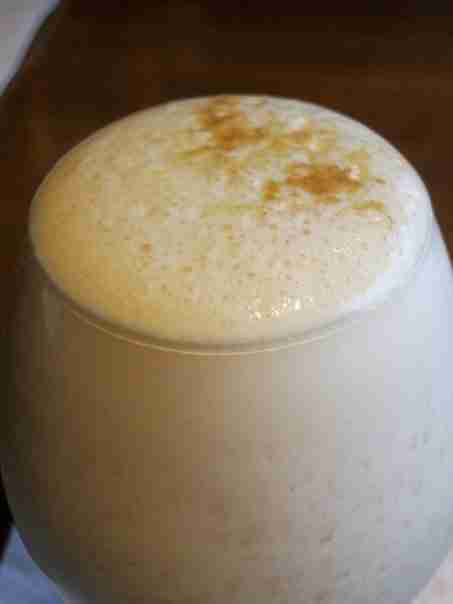 I really liked that drink and wanted more. It was a bit pricey, though. The Ceviche was bright and sour. It was perfect for summer. Too bad it was gray and freezing outside and not much warmer inside. Eun Jeong really liked it, though. She loves astringent tasting food, which I am starting to figure out is the Korean taste profile. 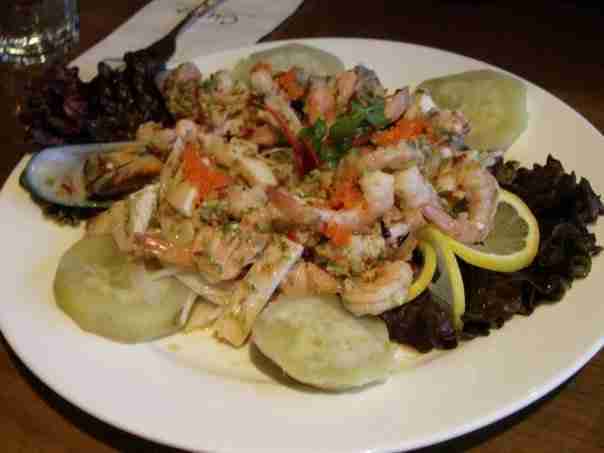 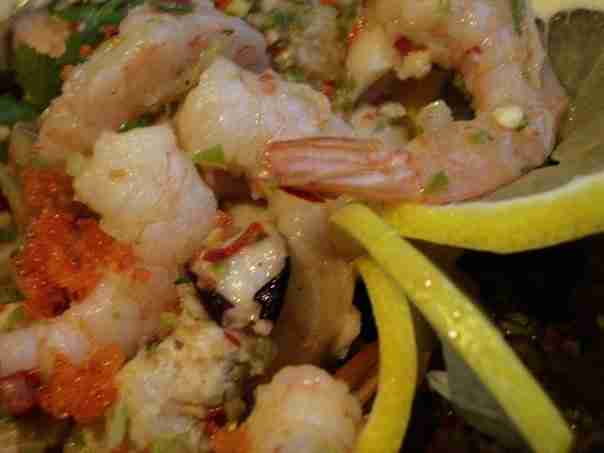 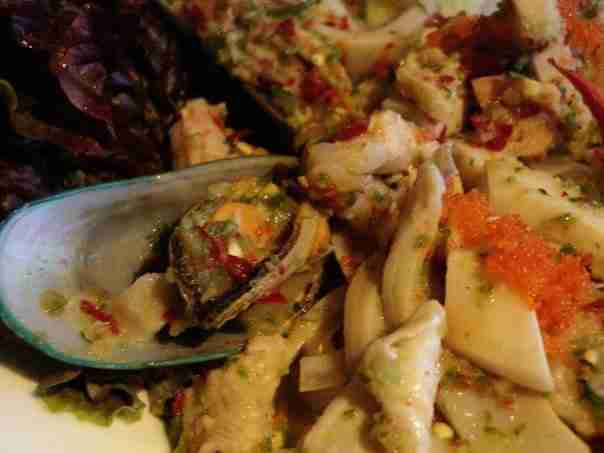 Our final stop that day was Sinchon–on a busy Saturday night. It was packed with college kids. We noticed that there were a lot of Japanese places. We have, in recent years, become fans of Japanese-style fresh Ramen. It’s smooth and savory. Here’s a little video of a Hakata Ramen street stand I went to in Fukuoka, Japan.

We found this one place in Sinchon, but it had no English on its sign. 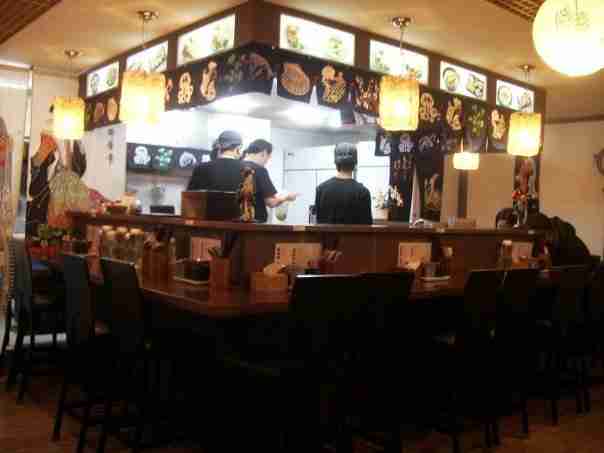 We were stuffed, but we still found room for Ramen. 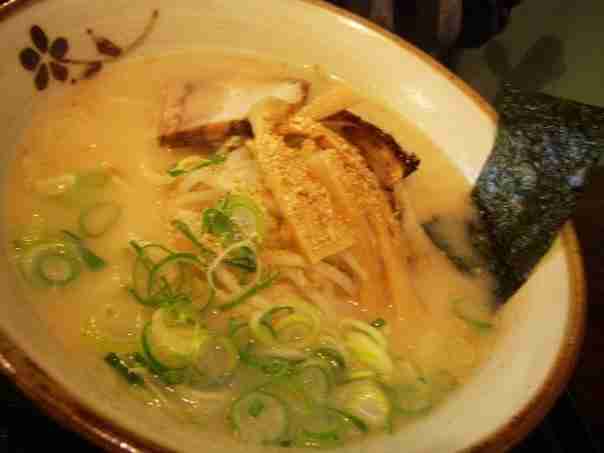 Eun Jeong’s was pretty good. It reminded me of Hakata Ramen but was on the salty side. There’s a Ramen shop in Myeong-dong that does it better. 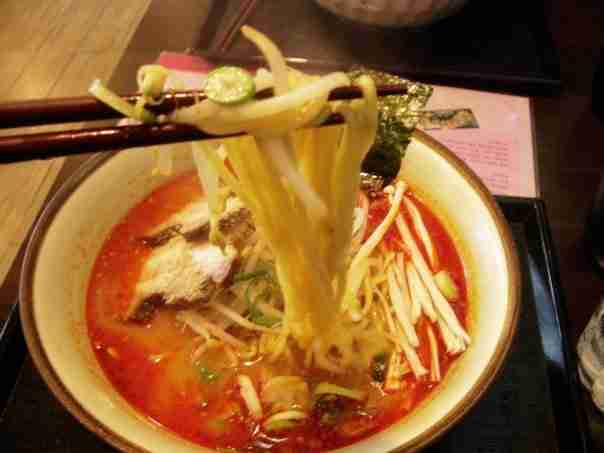 The genesis for this article was that I wanted to point out a few places near Sillim-dong, where I lived for three grueling months. It’s a horrible place to live in, but there were some things I liked about it, particularly the Sundae Village (Sundae Maul). 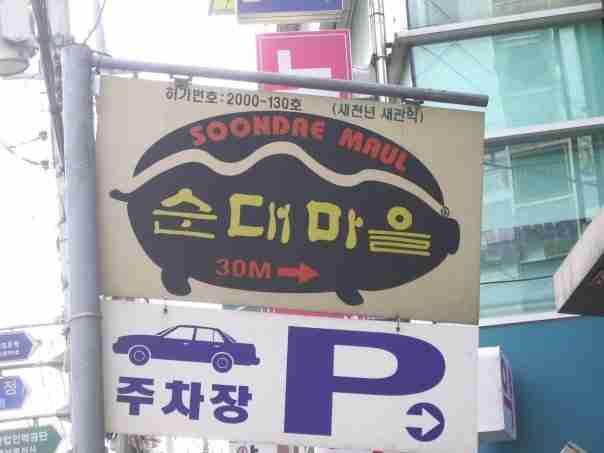 Here’s the big pink restaurant mentioned in the article. 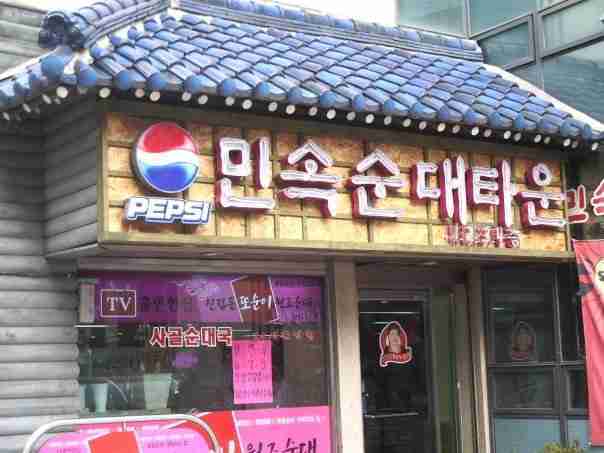 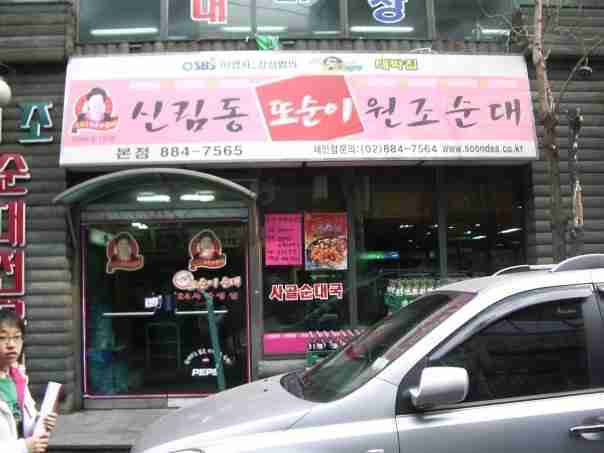 I also have a video of eating there from 2005, when I lived in the area.

My trip here was a sort of memory pilgrimage. I did this quick stop in Sillim and its neighbor Bongcheon on a Sunday. I wanted to feature and finally give some decent press to a great little one-man pizza place named Ruciano. 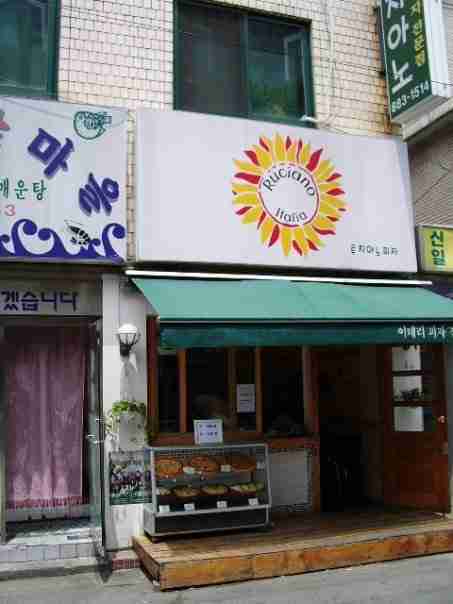 Unfortunately, it’s no longer there. It looks like it was replaced by another real estate agent. Still the Chinese groceries across the street were in business. 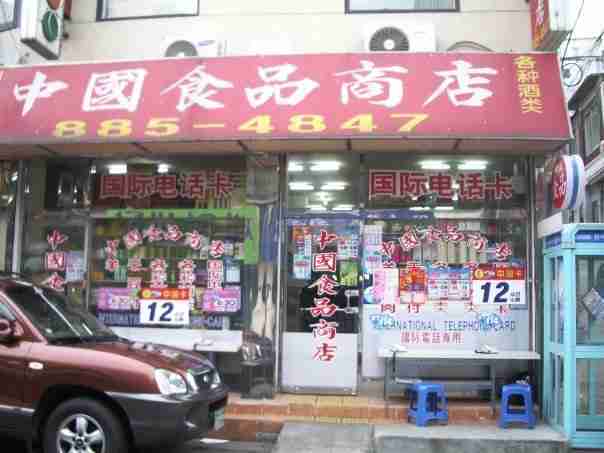 I love this store. It smells exotic and has a lot of unlabeled mysteries. This is where I found the cornmeal that became the grits article. It has fresh cilantro, big bottles of Tsingtao beer, walls of sauces, oils and spices, a fridge case and a freezer case, both filled with stuff I just want to buy and cook to see what the freak it is. 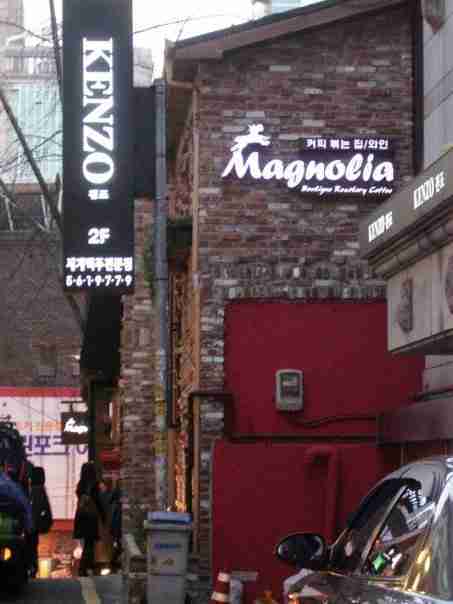 And now back to the beginning. Magnolia was the first successful (as in, made the article) place we visited on our first research trip in January. It was also the final place we went to that day. We were exhausted, so when we got a taste of their wonderfully fruity coffee, we felt re-energized. I have been back there, and they did not disappoint. The second floor, I must warn you, is sit-on-the-floor only. And you have to go up a narrow staircase flanked by burning candles. Flowing scarves are not recommended. 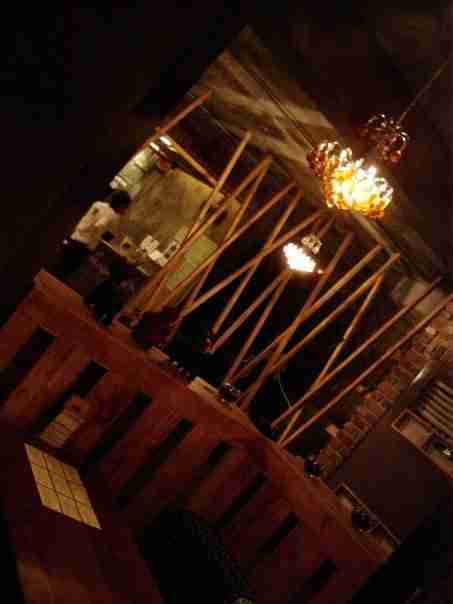 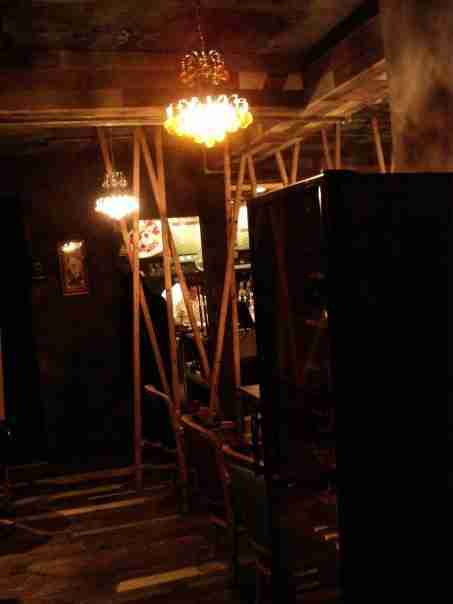 The first time, we ordered the Everything Waffle because they heavily promoted it. I actually liked it (sans tomatoes). 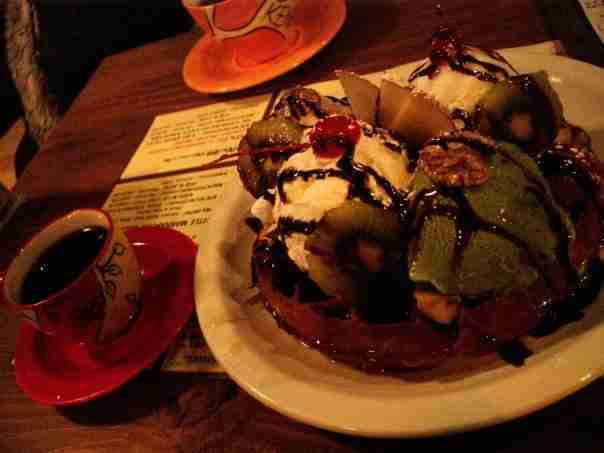 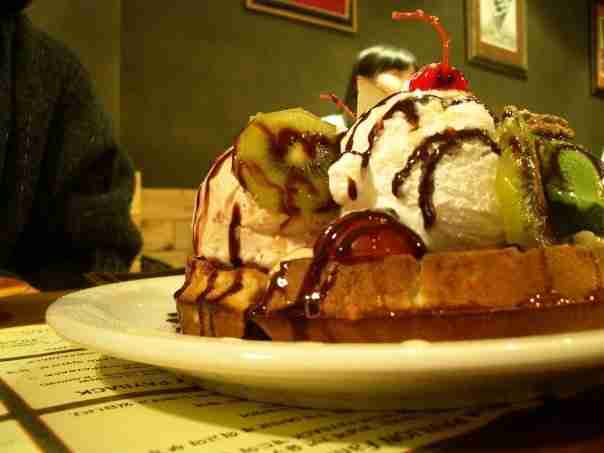 On my second trip there, I tried the pizzas. The Rucola Pizza is the one to get. That’s all I’ll say. 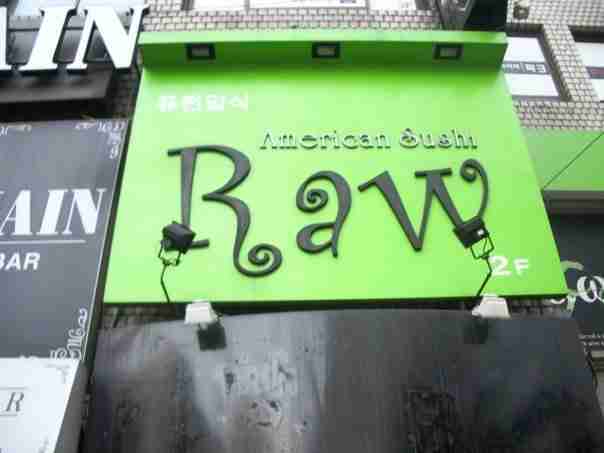 I’ll get to this later on its own special post. I can’t believe we wasted money there. I’m sure it was worse than Chez Pim’s “worst meal” ever. Here’s a hint (behind the tuna). 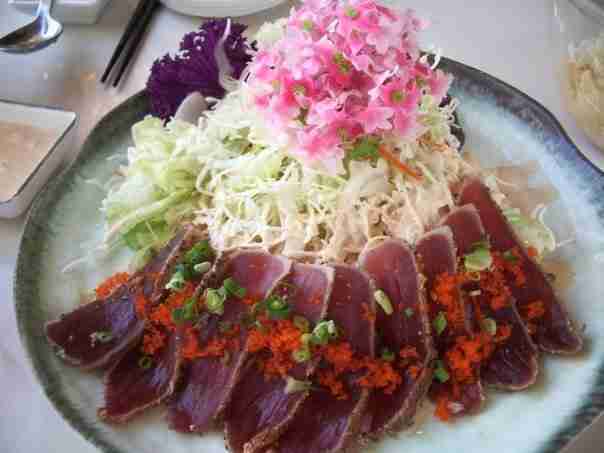 I’ll be out of town for the next two weeks. Posting will be sparse, but I’m also working on future SEOUL Magazine and Korea Herald articles. I’m not committed to these ideas, but here are some future plans:

– The Best Korean Food That You Don’t Know About (from the tourist brochures, at least)

Actually, it would be good to have more company on these “research trips.” Poor Eun Jeong, I’m sure, is still post-traumatic about the work for this past article. Maybe she respects that what I do is actual work–nah, that’s asking too much.