An essay I wrote on the Korean government’s ham-handedness in promoting Korean cuisine overseas has been published in this week’s Newsweek Korea. It’s mostly about how the government and some private entities aren’t even bothering to ask foreigners what they like.  They’re forcing what they themselves like onto the market, like expensive royal court cuisine and ddeokbokki/”topoki” (see “Agriculture Ministry is Officially NUTS“).

With impeccable timing to prove my point, reader Edward brings to my attention a post by Food Comma that L.A. has just finished a Korean BBQ festival and contest.  I’ve been making the rounds to any Korean who would bother to listen to me that Korea, with all its festivals, really needs a BBQ festival.  Can you believe they don’t have any?  They have a giant festival for rice cakes but not one for BBQ?

One Korean friend replied, “Who would be interested in a BBQ contest?” 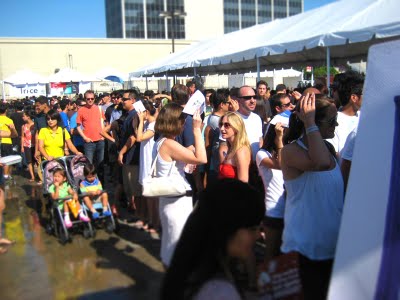 I didn’t find any official number for the crowd, but there were 30-minute to 1-hour waits, and food stalls ran out of meat.  The L.A. festival also had a Korean BBQ marinating demonstration and a Choco-Pie eating contest.  And you can’t have a Korean festival without those great organizational skills.

We had a great time at the cook-off but I gotta say it wasn’t especially well organized or executed. In fact we learned that the health inspector didn’t even give the OK to start serving food until an hour and half after the gates opened.

I know I’m coming off negative in this post, but I’m actually positive.  I just want to yell to these Korean food promoters, “Wake up!  Your food’s great.  No one cares about ddeokbokki.  Court cuisine is too bland and too Japanese looking.  You’re blessed with some of the best BBQ in the world.  Run with it!”