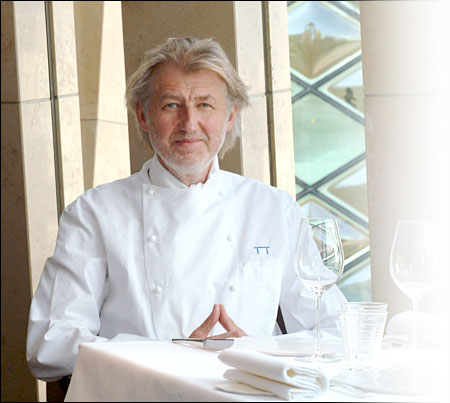 SQUIRRELANDGMAN, who runs Wine Korea, recently had the good fortune to try out the new Pierre Gagnaire at the Lotte Hotel in Seoul.  This may the biggest appearance of Michelin-star cuisine in Korea.  Yeah, yeah, the Michelin Guide doesn’t even come close to touching Korea, so maybe it’s like a touring production of “Cats.”

These are the types of restaurants and chefs I only get to read about.  Hearing of Pierre Gagnaire opening a place in Seoul, his third restaurant in east Asia after Tokyo and Hong Kong (and one of four special enough to bear his name), is like–I don’t know–Beyonce coming to Seoul (that’s a point of reference for Expat Jane).

I’m repeating the mantra, “I can’t believe it’s this close.”

Yet so far away.

Wine Korea got to taste the lunch menu (what, no pics) and paid well for it.  And he said it was worth it and more.

You gotta check out the menu! (And here’s the menu in Korean)

I’m happy that on top of French, Indian, southeast Asian and Japanese cameos, a little bit of Korean is showing up in the menu.

I hope the menu plays more with the, really, untouched playground of Korean ingredients and staples.  Until then–*cough* we are taking donations for a field trip to bring you the pictures that our friends at Wine Korea were too caught up in the throes of rapture to take.