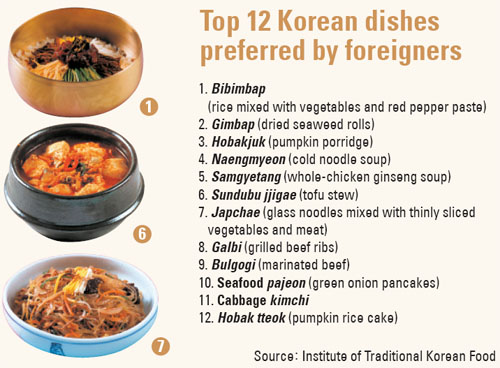 From the JoongAng Daily

A few days ago I posted an article of an event at the Institute of Traditional Korean Food.  They had a layout of dishes that supposedly foreigners liked best.  I wondered aloud what the dishes were and how they came about it.

The JoongAng Daily came to the rescue.  So it looks like a survey was sent to overseas restaurants.  These were the top twelve.  Many no-brainers on the list, but their placement seems odd.  Hobakjuk is at #3.  I like pumpkin porridge, but I didn’t know it was popular.  The grilled meat dishes are close to the bottom.  And hobak tteok??  I don’t think I’ve even seen it much in Korea.  Is it even in western countries?

At least now we have the list.  Controversial, I’d say.  Reactions?

[HT to The Marmot]