The Black Table’s Take on Galbi in New York 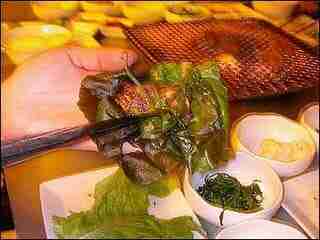 I was looking around for something I forget about when I came across this blog entry about Korean BBQ in NYC. Looking at the pictures and reading the descriptions, it’s amazing how Korean food is non-negotiable when moving to other countries (unlike Chinese food). The only differences I saw was that beef was more common, because of price and tastes, I assume. And coarse salt was a condiment, which I only see for samgyeopsal in Korea.

Really, this article describes the primitive emotions in eating Korean BBQ. Another thing that pleased me was that the author was introduced to Korean food through Japanese friends, “who spoke of Korean barbecue with a kind of animal yearning, as thought it wasn’t simply food to be eaten, but a condition one must aspire to, a gift to be coveted, then ravished.”

My impression of the tense historical relationship between Japan and Korea was that the Japanese looked on Koreans with disdain as backward country folk with no redeeming qualities. There’s even a graphic novel that’s currently popular in Japan that racially degrades Koreans and Japanese.

WAY OFF TOPIC
Honestly, I think that’s why I prefer Korean food over Japanese food (even though I really like Japanese food). Koreans’ history of dealing with poverty and famine has created a unique rustic and honest cuisine that is very different from Japanese cuisine. It’s like comparing Parisian cuisine to the staples of Provence. I prefer the peasant food of Provence.

That aside, this article captures the spirit of Korean BBQ in America and gives me comfort in the thought that my fellow countrymen can embrace kimchi and the art and danger of grilling food at your table.