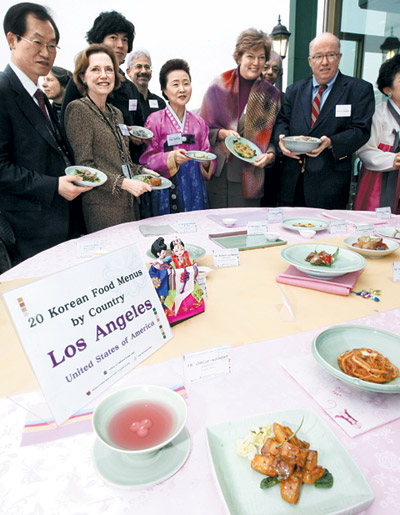 The Chosun Ilbo relates an event at the Institute of Traditional Korean Food that invited prominent Americans living in Seoul (I wasn’t invited because I was too prominent).  It featured 20 Korean dishes that were most favored by Americans.  Would love to know what they were and how they figured this out.  The killer quote came from ITKF founder Yoon Sook-ja (the author of the kimchi book I like):

“New Yorkers tend to favor dishes that accentuate the flavors of individual ingredients. They also like sweet and soft dishes, such as pumpkin porridge.”

“Diners in L.A. also enjoy spicy dishes, which seems to reflect the prevalence of Asian and Mexican foods in that part of the country as it has a large population of immigrants.”

I’ll leave it to you.  I’m not from New York or Los Angeles but from the Gulf Coast–ya know, where Tabasco comes from–so we can handle the spice no problem.  But do you think there are really distinct differences in what New Yorkers and Angelinos like in Korean food?

(HT to The Marmot)