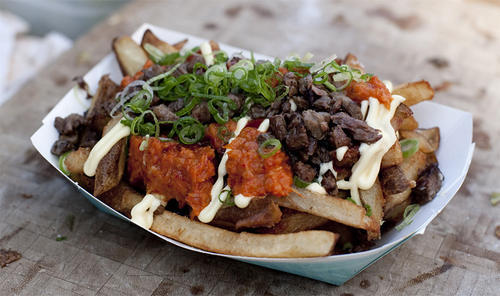 I’ve hinted it many times, and we just keep getting confirmation after confirmation. The Korean government and corporations dream of conquering the world with their prissy pretentious overpriced “well-being” concept of Korean food–you know the postulations like “Americans pay $300 for Japanese food, why not Korean” and “Americans only eat hamburgers, so they’ll like Korean food because it’s well-being.”

But reality blows their sanitized fabrications out of the gukmul.

SF Weekly reports that Korean food is entering the American consciousness, or at least the San Fanciscan consciousness, as stoner junk eats. It started with the Kogi tacos in L.A. Now street vendors and strip malls sell bulgogi topped hot dogs (you can actually get those at New York Hot Dog & Coffee in Korea), marinated beef and kimchi-stuffed sandwiches with creamy gochujang mayo, and fries topped with chopped galbi.

Accomplished Seattle food writer Matthew Amster-Burto (Hungry Monkey: A Food-Loving Father’s Quest to Raise an Adventurous Eater) ponders why Korean food hasn’t taken off in Seattle even though the stars are aligned that way. He blames the insular tendencies of Korean restaurateurs, as in their neglect to advertise in English papers, and the baffled cluelessness Americans feel in Korean restaurants, to which I can relate. Talking to Joule’s Rachel Yang, he works on some ideas for establishing Korean food in Seattle, which could be a blueprint for the rest of the States.

2. Promote gochujang. The culinary oracles are already predicting that gochujang is about to become the next sriracha sauce.

3. Korean tacos are already getting Americans used to Korean flavors, like kimchi.

Face it, folks. Royal court cuisine isn’t going to lead the charge. Neither is topoki. Americans aren’t going to latch onto yangnyeom dolsot bap because it’s boring but healthy. Rule #1 is taste. And even though my cholesterol count rises just reading those descriptions, the Korean junk food invasion looks mighty tasty.

Enjoying Korean food without knowing it

[HT to a very special reader]