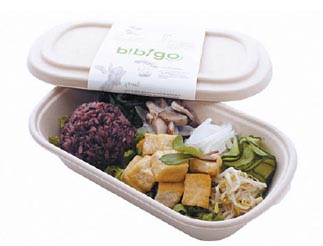 Here it is, folks. Meet your new master.

Remember the beloved Cafe Sobahn in downtown Seoul? It closed down to create this:

The name “Bibigo” combines bibimbap, the spicy mixed rice and vegetable dish and “to go.” The restaurant’s emphasis is on quick takeout.

“It’s often the case that foreigners have a difficult time eating Korean food cooked and served the traditional way,” [CJ Foodville CEO Kim Il-chun] said. “Should Koreans emphasize the traditional element of the food, foreigners may take interest in it out of curiosity, but in the long term there will be a limit to that interest.”

“We want Bibigo to be the McDonald’s or Starbucks of Korean food,” he said.

I hope you weren’t in the middle of drinking your coffee when reading that.

Here’s the scoop. Some of you may remember Seoul Eats and ZenKimchi organizing secret test marketing last year for a Korean restaurant. It was for Cafe Sobahn’s expansion into overseas markets. Some of you participated in it, and it was a good time. The word spread about Cafe Sobahn, and it became a favorite amongst the foreigner crowd. Towards the end of the market testing, which the exec in charge admitted that CJ had little experience in doing, they asked what we thought of the name “Bibigo.”

There was almost universal laughter and strong opposition to the name.

I guess you can figure out that they threw the market testing out the window, shuttered Cafe Sobahn, and went ahead with shoving this Bibigo down their markets’ throats.

Despite the McDonaldization and that bitter tasting story, I would still like to try it out. They’re still obsessed with the “Americans will eat it because it’s healthy” meme over the reality that Americans put taste over health most of the time. They’re not Koreans. These guys have a hard time mentally wrapping around that concept. But after reading the description of one dish, black rice, bulgogi, and citron soy sauce, I’d be interested in checking it out.

But if they won’t listen to the market they’re trying to sell to, maybe they’d at least learn from the failed efforts of their rivals. It got passed on to me that Korean bakery Paris Baguette, which does have a location in L.A., try to rebrand itself in another location as Wheatberry Bakery in Pasadena, CA. Yes, they were able to fool some folks into thinking it was an olde worlde European bakery, but others saw through it. Through bad management (likely middle-aged ajosshis refusing to listen to the on-the-frontline notes from their underlings), unsanitary conditions, bait-and-switch overpricing (sound familiar?) and a total arrogant presumption towards their market, Wheatberry crashed down in flames.

[HT to a very special reader]