Krispy Kreme — How Sweet It Is 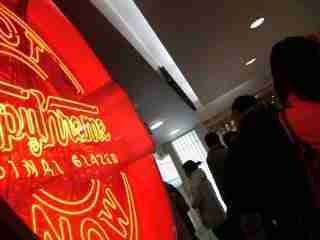 This is when I get the nastiest and most un-PC about Koreans’ approach to food. It’s when they mimic Western food for the Korean palate. Everything — everything — is sweetened.

At any bakery in Korea, the only non-sweet bread is the stale baguette in the corner. Even the garlic bread is sweetened. Almost all pizzas are served with sweet corn or sweet potatoes along with a side of sweet pickles. The sweet pickles come with almost every sit down Western meal, whether it be Outback, TGI Friday’s, or a local fancy steakhouse. Sandwiches have to have some sweet fruit sauce, honey mustard, and sometimes — gasp — strawberries. All mustard is honey mustard. Sweet ketchup is considered an elegant exotic sauce, which is thrown on the oddest things. Steaks come smothered in a sweet brown sauce, as do hot dogs. Even the scant Mexican food I find tastes like a cup of sugar was thrown in the sauce.

Dunkin’ Donuts is one of the most successful foreign fast food chains in Korea. On casual glance, it looks far more successful than McDonald’s. Yet when I first came to Korea, I saw there were no Krispy Kreme doughnuts.

If you didn’t know already, Krispy Kremes are light airy and extremely sweet doughnuts. The company was born in the South 1937 and pretty much stayed there until the late 1990s. It started expanding and went public. It was the darling of Wall Street for a while.

When I lived in Rochester, New York, a Krispy Kreme opened near my house, and cars were wrapped two-fold around the drive-thru for two weeks and was the talk of the office.

Actually, Krispy Kremes are a bit too sweet for my taste. I didn’t like them as a kid. When I discovered that I could order a fresh hot doughnut whenever the “Hot Doughnuts Now” sign was turned on, I gained a new appreciation for them. Krispy Kremes don’t age gracefully. They are best hot and fresh off the conveyor belt. After half a day, they start getting gooey and sticky. By two days, they’re practically inedible.

Realizing Koreans’ penchant for sweetened Western food, I consistently said, “The first ajossi to open a Krispy Kreme in Korea is going to be a very rich man.”

My prophecy is coming true.

Not only one but six stores have opened thus far. Eun Jeong and I were in the vicinity of the Sinchon store in Lotte Department store. I think it’s the flagship outlet. I thought I’d go grab some doughnuts for nostalgia’s sake.

Eun Jeong laughed when I said I could smell them from the other side of the department store. When we got there, we saw this. 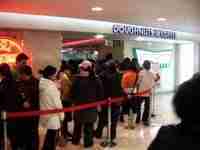 Eun Jeong, who works as a tour guide in Seoul, said that it has been like this every day she has seen it. This line was pretty far outside the store. I changed my mind about getting a doughnut. Yet Eun Jeong wanted a coffee and stood in line. Yeah, we could have gone for coffee somewhere else, but we had made the journey this far, she didn’t want to give up. 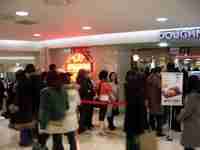 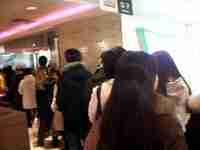 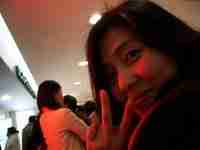 And we got a guy to take our picture while in line. 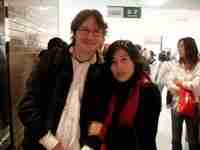 The line, despite being long, went through quickly. It passes in front of the doughnut making machinery, giving some entertainment. Near the front of the line, a girl was handing out free samples of hot doughnuts.

We got a dozen doughnuts and some coffees. Eun Jeong could eat only one. I only two. I packed the rest in a zip top bag and took them to work. The Canadians I work with had never tried them before and were hooked, as were the Koreans.

It was one of the few times I was right about something. Krispy Kreme in Korea is making someone very rich.