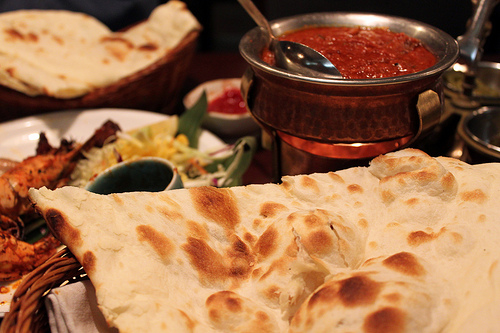 This has been coming a while. In 2007, I raved about a pan-Asian joint called Tikiti. I was railed at for being so positive. Looking back, the food was dull, but it was so rare for me to get anything close to Indian food in my town. I jumped at anything that would bring some ethnic diversity to Anyang.

It didn’t last long. Tastes weren’t ready for that yet. The Koreanized pho (oh, sorry, “Vietnam Ssalguksu”) trend was rising, and there wasn’t room for anything else new.

I started catching the stir of something different a year ago. My source, as usual, was Korean TV. I regularly watch these shows on the weekends where they feature interesting restaurants. Most all of them are Korean. But suddenly, “What is this? they’re in what looks like an Indian restaurant in Ansan!”

Ansan, on the southern end of the blue subway line, is an enclave of immigrants with a rich conglomeration of world foods. It’s the only place in Korea that sells durian on the street. Central Asian restaurants are plentiful there. To the north in Myeong-dong and Jongno there are a few longtime Indian joints, but they were usually patronized by diehard Indian fans in Korea. In the middle was Itaewon, and those restaurants usually had English-speaking expats, which are effective Korean repellents.

Indian restaurants started to spread out a bit. After Tikiti closed, a real Indian restaurant opened in Anyang. The side streets of Gangnam sprouted with restaurants advertising “Indo Curry.” I recently went to Ilsan and was introduced to Asia Asia by my old friend Brant. It’s spacious, well decorated, and the service is great. What got me was how this place got packed at lunchtime by Koreans in work clothes. I watched them eat. They ordered the great spicy curries and loads of naan. They ate like old pros. They enjoyed it. And usually where foreign foods are in the realm of young females, there was an almost even mix of men and women greatly enjoying their Indo curry.

The real sign that a trend is taking hold is when it invades the supermarkets. My local E-Mart started carrying microwavable naan and curry a year ago. At first, the stock was sporadic, but then it became reliable.

The real, real sign that it’s become part of the culture is when it invades the homes. As of a couple months ago, kits have started to load onto supermarket shelves to make Indo curries and naan at home. And not just a monolithic curry–there are different kinds of curries you can buy as packaged mixes. There’s a homemade naan kit. And now there are two different Indian curry kits at my local K-Mart (the Korean grocery store, not the American big box). Before then, spaghetti sauce was the most ethnic you could get at K-Mart.

Now it’s everywhere. The Indian curry mixes are advertised on the subway, with a Korean mother making curry for her child. As mentioned, Gangnam’s Indian restaurants are growing.

What I really like about this movement–not just a trend–is that it was introduced by central Asians. Indians and Pakistanis own and operate most of the restaurants, especially the original ones. This means that only small modifications were made for the Korean palate, like putting pickles on the table. But it hasn’t gone through the drastic Koreanification like Vietnamese pho has. Where real Vietnamese pho is full of bright colors and cilantro, Korean pho is a dull beige with only pickled onions, Korean chillies and bean sprouts as condiments. Cilantro has to be asked for separately.

I mention all this to EJ, and she says it’s logical. Koreans already have a taste for Japanese-Korean curry. It’s a yellowish curry with corn starch, so it has the look and consistency of snot. And it’s thrown on rice (Curry Rice). I haven’t seen Indian curry being treated this way so far. There was some rice on the Korean tables at these Indian restaurants, but there was waay moore naan.

Other trends I see happening:

Trends that are sticking around:

Trends that are dying or have died:

Trends they may be occurring in the future

Trends I wish would happen: