After lunch at Nashville, I said goodbye to Mike and did my usual Itaewon thang. That means I go to the Foreign Food Mart and buy new and interesting things. The Foreign Food Mart mostly has Pakistani/Indian foods and well-priced Halal meats. I picked up some lamb and spices.

I decided to take a back alley way to the subway station. From the Foreign Food Mart (which is next to What the Book bookstore) I took the road before the main street. It’s full of food stalls catering to the late night drinking crowd. At the end of the street, across from Gecko’s, Taco Amigo, and Memories (the dour German restaurant), was a Turkish kebab (Doner Kebab, specifically) stand that I had not seen before. 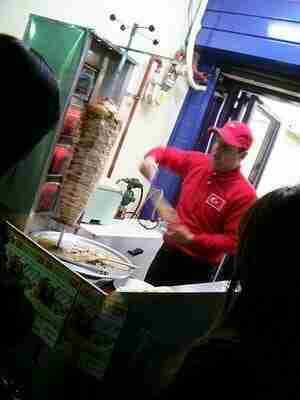 There was a good reason–it was its first day of operation.

There was a bit of a line outside, and the proprietor was welcoming everyone. He looked at me and said, “What can I get for you, my brother?”

“Great. Come on inside and sit down. It’s cold out here.” 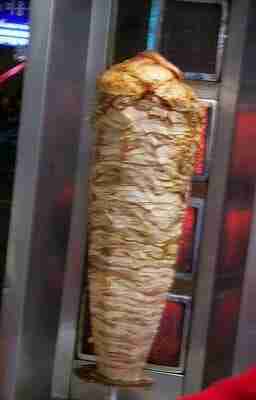 When I lived in Germany, places like this were everywhere, and I got so addicted to them. The places in Germany had a mixture of lamb and beef roasting on vertical rotating spits. I stupidly asked the owner if that was pork on there.

NOTE TO SELF: There is no such thing as Halal pork. Oh, and you’re a dumbass. 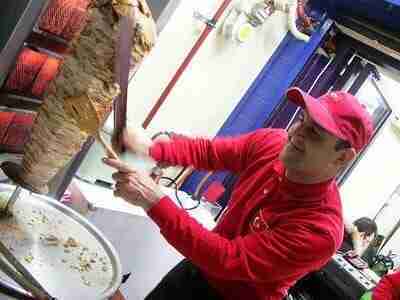 He laughed and said it was chicken.

He gave me two kebabs loaded with everything. They’re just 3,000 won a pop.

Eun Jeong had asked me to get her something. I had already gotten her some chili to go from Nashville. I thought I’d surprise her with these.

I took the trek home to Anyang, and she looked suspiciously at the kebabs. She took out a knife and fork and cut off a small piece. Tasted it. 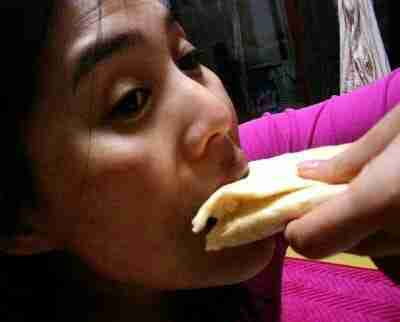 She didn’t answer. She just picked up the whole thing and stuffed it in her mouth.

I think I have a new tradition for when I venture into Itaewon.  Sultan Kebab.