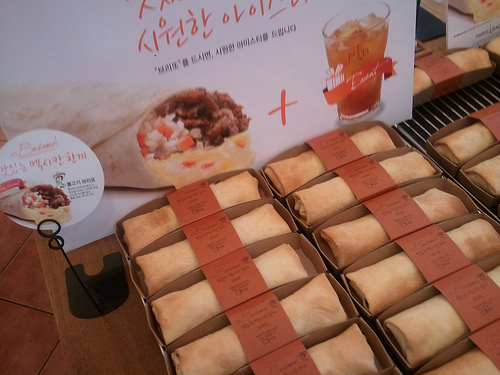 I have had a love-hate relationship with Paris Baguette over the years. When I first came to Korean in 2004 they pissed me off every time. They tended to put sugar in every one of their products, even their ham sandwiches. They’d throw ketchup, mayonnaise and cheese on white toast and call it “Pizza Bread.” And they’d put green tea in everything else.

But Paris Baguette and its rival Tous le Jours have been competing to improve and become more international and cosmopolitan. I’d say these days that PB has won the bakery wars. Both of them have been churning out gorgeous cakes from the beginning. But PB has been the one that has been most innovative in the savories department, giving them that edge. Some favorites of mine they’ve introduced in the past few years are focaccia pizzas, pineapple-bacon pastries on a stick, ham & cheese croissants, seafood wasabi sandwiches on butter rolls, grilled vegetable salad (the best salad I’ve had in Korea), cinnamon buns, English muffin breakfast sandwiches, and the highly addictive gut busters–baby choux.

I was really surprised when I walked in and found that they were selling Bulgogi Burritos. Despite their growing popularity in America, the Ko-Mex trend is not happening here. Mexican food is still alien. Only foreigners and young Korean women go to the Mexican restaurants. So seeing not only burritos but Bulgogi Burritos at PB showed that they believed that this could go into the Korean mainstream. And it’s now their big promotion.

I bought a couple for under W4,000 each and brought them home. They come with a little packet of hot sauce. I threw them in the toaster oven to heat them up. And you know what–not bad. They’re filled with bulgogi, mozzarella, and what they call “Mexican rice.” The bulgogi could use more flavor, but with the hot sauce it filled my Taco Bell cravings. And the price is about half what you’d pay at a restaurant.

So Paris Baguette, you win again.