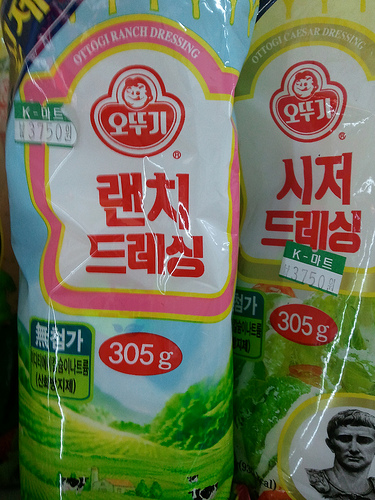 Seriously, Ranch dressing has been one of those elusive items that American expats had always taken for granted before coming to Korea. The only places to get it were shady foreign food markets, military base connections, or Costco–and even Costco didn’t always have it. I had even researched on ways to make it at home to post on the blog, but it required items that were also hard to get your hands on, like buttermilk and sour cream. And making my own sour cream required a sour cream culture, so that made it pointless.

Foreign brand Caesar dressing started making small appearances a couple of years ago, but it looks like Ottogi has recently launched both Caesar and Ranch dressings. I bought the Ranch and tried it with some deep fried pickles (oh my, so good).

The taste is just like Ranch. It’s not sweetened, folks! The only thing you need to be prepared for is its consistency. It’s as thick as mayonnaise, if not thicker. So it’s not the best for salads, but it’s perfect for dipping and putting on sandwiches.