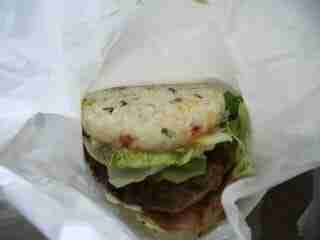 You’re not seeing things. This is a real hamburger. It’s Lotteria’s new promotion.

In a way, it makes sense. Many Koreans I know have trouble going through a meal without rice. And how much rice is in your average burger and fries combo meal?

So why not replace the bun with some pressed sticky rice? Add some vegetables to make it seem healthy, and you have the new Rice-Vegetable Burger.

Lotteria is introducing this concept on two of their burgers, the bulgogi and the kimchi burgers. I stopped by and got the bulgogi one the other day. 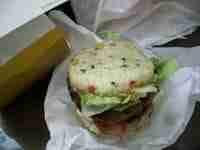 I wondered if there was some type of post-modern industrial technique to make the rice stick together like bread. I don’t think rice has the powerful glutens bread does.

As I suspected, there was not special magic technique. The rice “bun” was just pressed rice. It promptly disintegrated after my first bite, and Lotteria didn’t supply a fork to finish what was quickly becoming bulgogi burger bibimbap.

I’ve said it before. Korean fast food corporations sometimes hit the mark with their strange ideas. But we have to go through some rice-vegetable burgers along the way.