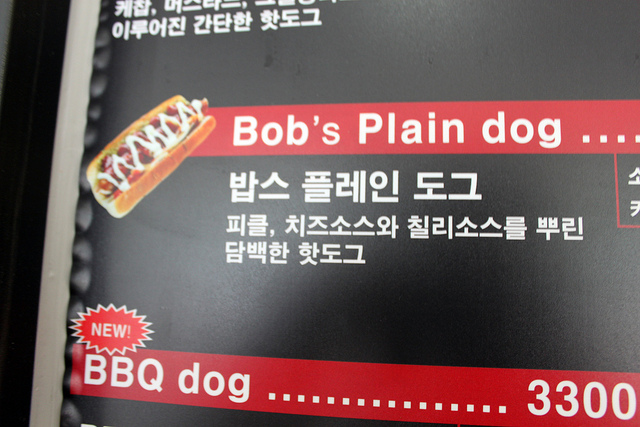 Here’s a classic example showing that Koreans can’t leave any foreign food alone. Everything has to be gussied up in squeeze bottle sauces. I mean, if you think American sushi rolls are gaudy, wait till you take a spoon to move aside the layers of mayonnaise and honey mustard to rescue your maki rolls from drowning at a Korean California-style sushi joint.

So, yeah, above we have what’s called a “plain dog,” which would be a hot dog in a bun with nothing else (sometimes sans bun) most anywhere else in the world. But in Korea, it means just a few less items than normal.

Now here’s where the story takes a twist. I was heading to this place, Bob’s Barbie, which recently opened in Anyang’s VenturDigm Building. I knew there was also a franchise in Hongdae, and they both promised meat pies. We really went there for the meat pies to see if we could get a break from the paltry variety near our workplace, which consists of donkkass (my spelling) and Pizza School and nothing else.

The pies were small, so I got their “chili dog” to round out the lunch. And I was surprised. It was loaded, but it was good loaded. No honey mustard. No mayo. No peanut butter and cabbage (are you listening Sso-ja Dog). This tasted like how I would dress a hot dog at home. It was almost Chicago style. Jalapenos. Meat sauce. Chili sauce.

Read the review and get directions here at ZenKimchi Dining.