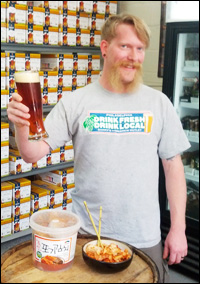 I guess kimchi is really catching on now.

The Korea Times has posted a story on two brewers, one from Ontario and the other from Philadelpia, who have incorporated kimchi into making one of their beers.

How did this idea come about? Jimmy McMillan from Philadelphia:

“I love eating Korean barbeque. A few nights before I decided to make the kimchi beer, we had a Korean style barbeque night in the store,’’ recalled McMillan. “After walking by the refrigerator, I noticed about a pound of kimchi was left, along with a few bags of rice crackers.’’

At that moment, he decided to toss the leftovers directly in the mash, one of the first processes in beer brewing.

“I proceeded to brew in a normal style and added some Sriracha hot sauce during the last five minutes of the boil for a final kick,’’ said McMillan. “Then I cooled the wort, pitched the yeast and hoped for the best. Three weeks later, it was complete and almost everyone loved it.’’

The descriptions of the final products don’t sound like sour beer.

“It was a beer first with all of the rich malt flavors, followed by the same lingering flavors that come with kimchi, the spices, garlic and pickled nature of the product.’’

May be you could drink this to wash down that Kimchi Ramen Grilled Cheese you just scarfed.

Read more at The Korea Times