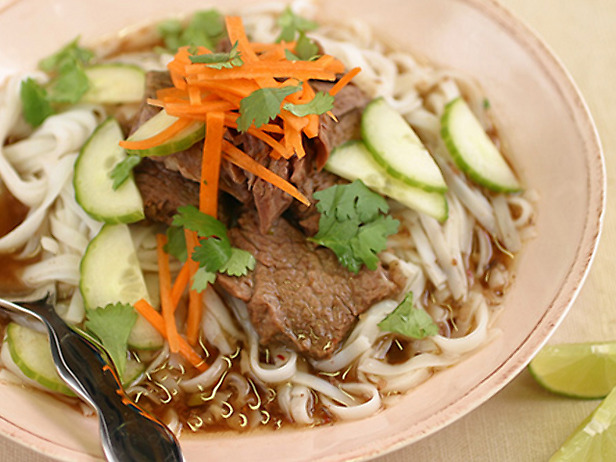 Thanks to reader Outre for pointing this out.

It looks like the Food Network thinks like former Top Chef contestants in that all Asian food is the same.  This is their recipe and photo for Slow Cooked Korean-style Short Rib Soup.  What the Food Network Kitchens give us is a recipe for what looks like pho.  The big hint that it’s not Korean is the cilantro and lime, considering cilantro is having a hard time penetrating the Korean market, and limes are almost impossible to find.  They’re the unicorns of produce in Korea.

Let’s go to the comments for this recipe, shall we?

My husband and I are huge fans of asian cuisine, but we have never had Korean food before, this was a perfect introduction to… the flavors of Korean food. The soup is spicy, but the cucumbers, cilantro, lime and carrots help ass some sweetness to the spicy! I also use pork instead of beef because my husband has an allergy to beef, it is just as good! I would recommend this to anyone and everyone! Amazing dish!

And from Marliyn in Hawaii

This is a great recipe, and for the life of us, we can’t understand what all the grumbling is about! Beef short ribs are… fatty by nature! Using a gravy separator to pour off fat, save broth, will easily take care of that problem. Cilantro leaf is the same thing as chinese parsley, an asian food staple. It is part of what makes this dish so authentic! Yes, there is a lot of chili paste called for: that is a normal amount for korean food. We found this recipe to be right on the money for authentic Korean cuisine. My husband’s hairdresser from Seoul, Korea thought these ribs needed more chili paste than called for in the recipe.

But some people saw through the emperor’s clothes.

i’ m korean and i have never heard of this before lol.

I don’t know what food network was thinking claiming this recipe is ‘Korean-style’. It’s clearly Southeast Asian-style. People ignorantly assume Asia is all the same but it’s not. Just because there are soy sauce and Korean chili paste(which is ok to sub with sambal oelek, not a Korean spice) in the recipe doesn’t make it Korean. Cilantro and lime, are not, and never have been part of traditional or modern Korean cuisine… or Japanese. Some part of China uses cilantro, but not all of China. This is Pho recipe in disguise. All of you have been fooled into FN into thinking you’ve tried a Korean dish, I can assure you, this isn’t. They really need to do more research. It’s a shame they’d post a recipe that takes longer to cook than most recipes and can’t even put it in the right cuisine type.

Note to the Food Network and middle America: please do a little research.  Even Wikipedia.

Maybe America views Asian cuisines these days similar to how it viewed Mexican in the 1950s and 1960s.  There was a recipe in the classic Gallery of Regrettable Foods from a mid-twentieth century cookbook for a Mexican casserole, but the only thing that made it remotely Mexican was a bit of chili powder, which was optional.