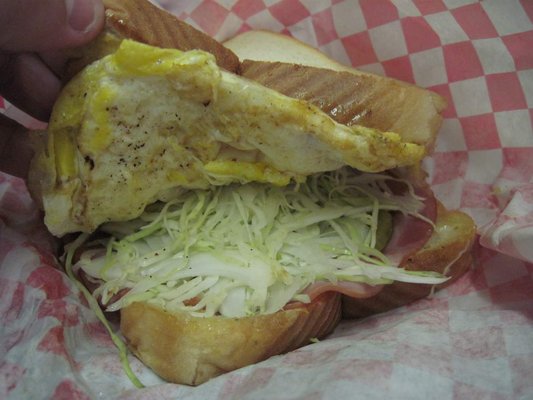 Westerners in Korea have a love-mostly-hate relationship with Isaac Toast. Before McDonald’s started serving breakfast a few years ago, it was the closest we got to a breakfast sandwich.

And you have to be vigilant to make them stop right there before they layer on the shredded cabbage, sweet pickles and kiwi sauce.

Now, I’m not sure how America’s Korean food makeover known as the Korean taco would fare in the Great Han Empire. But I think we have a clue of how one of Korea’s many surreal interpretations of the sandwich would fare in the west. A branch of Isaac Toast opened in Toronto and promptly closed, which sparked this lovely soliloquy to its demise:

Apparently Canada was not ready for Korean WTF sandwiches. As quickly and mysteriously as Canada’s flagship Isaac Toast joint opened, it closed. Nary a word. Nary a warning. No parades. Not even a “closed for renovations” sign which we all acknowledge as a polite, face-saving fiction on par with “quantitative easing” or “extra judicial killings”. There’s just a papered over window and the remnants of the Isaac Toast sign high up on the wall where I’m sure no one really wants to climb up and take down. I wouldn’t.

When you chase the dragon, sometimes you’re going to get burned. Or bitten. Maybe clawed. Creative destruction is a part of life in the Mother Country and one becomes desensitized to the ephemeral nature of take-out. One day you find your perfect wang mandoo shop. 6 beautiful mystery meat dumplings for $3. Three weeks later it’s a cell phone store. Or an English academy. Or a pet store and then a pet store that sells pets in the back and bbq’d meat on a stick up front. You just live with the idea loyalty is not to be squandered on take out.

Read the rest on Yelp.

6 thoughts on “A Tribute to Isaac Toast”