If you visit Busan 부산 and skip Jagalchi Shijang (Market) 자갈치시장, you haven’t really visited Busan at all. The market opened in 1924 and gets its name from the nearby pebble beach—jagal 자갈 means pebble or gravel. In other words, Pebble Beach, Calif., is not the only famous pebble beach in the world.

On a mid-May visit to Busan, Hubby and I had snacked our way through  ssiat hotteok 씨앗호떡 and  mandu 만두 stands in Busan International Film Festival Plaza then crossed the  Gudeok-ro 구덕로 thoroughfare to Jagalchi Market. 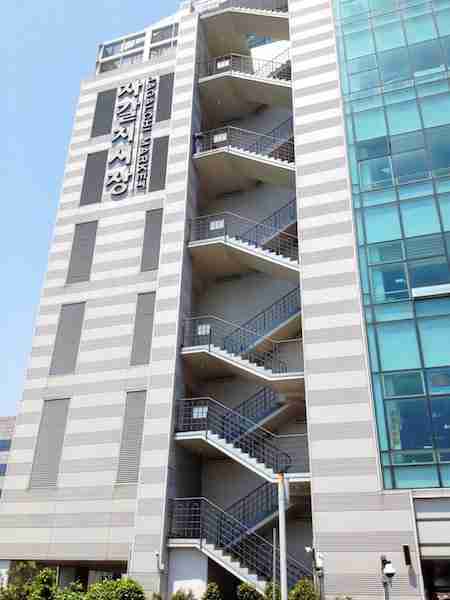 Busan is blessed with easy access to all kinds of fresh seafood. The best deals come from those selling fish in the outdoor part of the market. But unless your Korean skills are as fresh as the fare, you’ll find it difficult to bargain or ask for what you want.

Already having walked off the hotteok breakfast, we went into the six-story market building. There are a number of restaurants on the second floor. To the uninitiated, one restaurant area can blend into the other, but waymarker signs help you orient yourself and find your way around.

In section C1, is a restaurant called  Dwejichobap 돼지초밥, also known as Jackey’s Seafood. Jackey starred in a couple of food shows on the KBS TV network and displays screenshots from those appearances around his section of the floor.

Don’t worry about finding this place; Jackey probably will see you first and introduce himself in English. He has a teaching aid with him at all times that has photos of which fish and seafood items are in season and can help guide you to the best choice. He can also offer you either Korean style seating (on the floor) or Western style seating (on chairs). 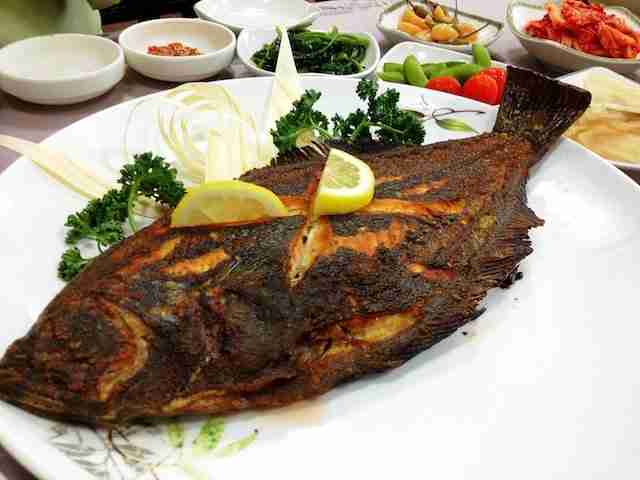 Grilled flounder at Jagalchi Market, caught and grilled the same day, can’t get much fresher than that. (Jeff Quackenbush photo)

Jackey’s is best-known for sushi — chobap 초밥 is the Korean term for the vinegar-flavored rice used in sushi. We weren’t in the mood for raw fish, so Jackey recommended grilled flounder, since it was in season at the time.

Served with banchan, the meal cost ₩40,000 (roughly $40) for two people. It was grilled and seasoned with lemon. A simply prepared fresh fish is much more delicious than a overly seasoned fish any day.