Woomi is an old-school 닭갈비 dakgalbi restaurant that has been in the mountain lakeside city of 춘천 Chuncheon, South Korea, since 1970. 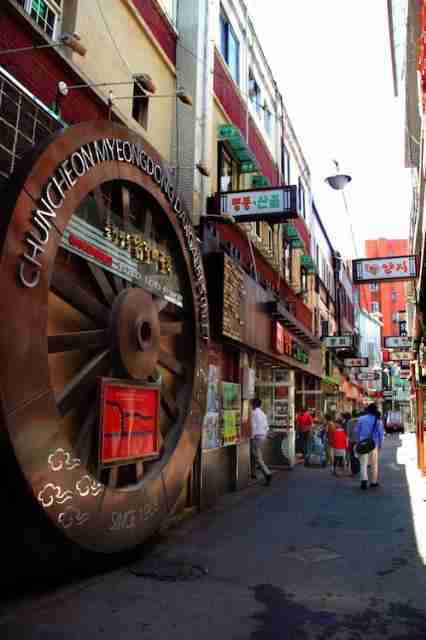 If you see the wagon wheel, you know you’re in chicken heaven. (Jeff Quackenbush photo)

This was the Chuncheon dakgalbi I remember from my teaching English in the city in 1997. That was before the 2002 Korean TV drama 겨울연가 Gyeoun Yeonga (Winter Sonata) turned the sites used for filming into a foreign tourism magnet as well as the 2005 closure of the U.S. Army’s Camp Page carried the city’s destiny in a totally different direction.

More recent variations of Chuncheon dakgalbi include finishing touches of rice or noodles and lots of cheese. 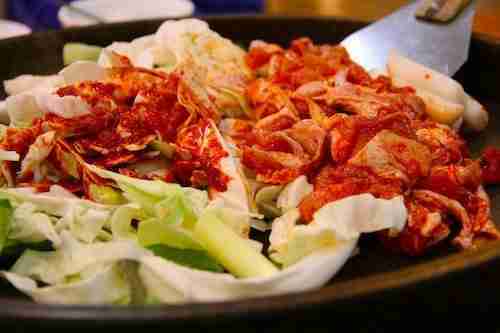 This is where the tasty begins. (Jeff Quackenbush photo)

반찬 Banchan (appetizer or side dish) for our dakgalbi at Woomi was a small bowl of 동치미 dongchimi (“winter kimchi”) to refresh the palate. Leaves of romaine lettuce to slather with 고추장 gochujang (spicy red pepper paste) and wrap around the dakgalbi, raw onion and raw garlic. 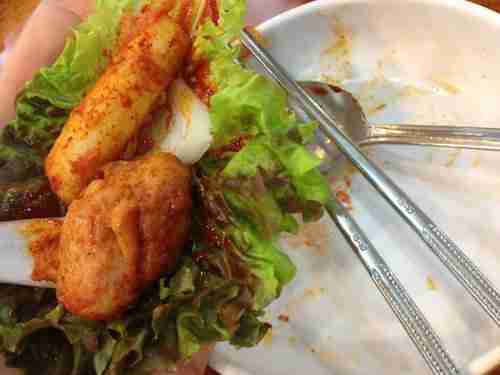 This is where the tasty chicken ends up, laying on a bed of gorgeous lettuce with some raw onion tucked inside. (Jeff Quackenbush photo)

Going back to Chuncheon

Attending a friend’s wedding in mid-May was a good excuse to indulge in the many good reasons to visit Korea. For me, the most exciting reason was a return after 15 years to my Korean “hometown” of Chuncheon, located about 75 kilometers east-northeast of Seoul in 강원도 Gangwon province.

It used to be a two-hour train ride between Seoul and Chuncheon, but now there’s both ITX high speed rail — takes about an hour and has mostly reserved seats for ₩6,700 (about $7) — and a subway line — takes about 90 minutes with first-come seating for ₩2,800 (about $3).

If you have any doubt as to which train to catch, just follow the throngs of middle-aged men and women decked out in their matching hiking clothes and equipment. Most likely, they’re heading toward Gangwon for some prime hiking and camping somewhere in between.

For the possibly under-equipped hiker, an ajumma walked through the subway cars, selling wide-brimmed hiking hats, gloves and face guards. 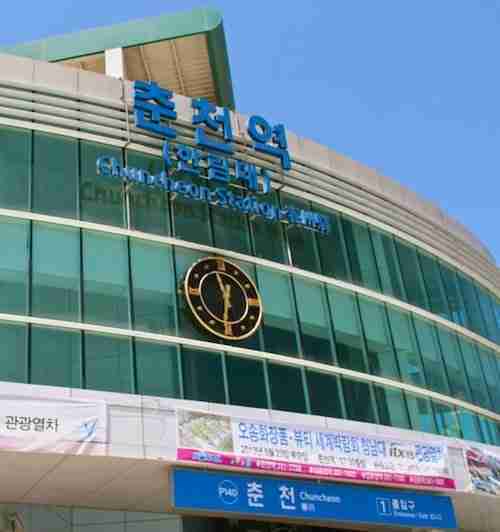 This is not Joon-Sang and Yu-Jin’s Chuncheon station. (Jeff Quackenbush photo)

The first thing we noticed about Chuncheon’s ongoing facelift was the train station itself. The simple train platform we frequented, and seen in Winter Sonata, had been replaced by a architecturally modern glass-and-stainless-steel building. 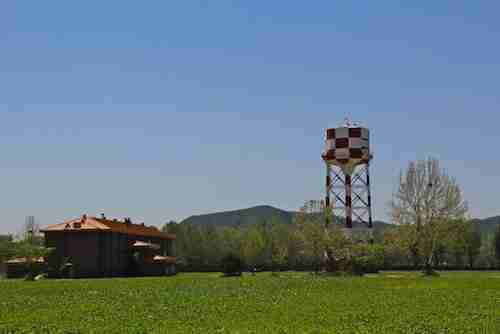 This is what is left of Camp Page in May 2013: a water tower and a large green field. The imposing concrete wall topped with razor wire is long gone. (Jeff Quackenbush photo)

A second major difference: The tall razor-wire-topped concrete walls of Camp Page no longer blocks your entry into Chuncheon. Instead of spending an extra ₩2,000 in taxi fare to circumnavigate the base as we used to, we had a straight shot from the station through the former base grounds to downtown and 명동 Myeong-dong (the main shopping district).

We walked from the train station straight up 평화로 Pyeonghwa-ro/금강로 Geumgang-ro to the Myeong-dong plaza (on the right, just past 정강로 Jungang-ro). It would have been a 20-minute walk or a few minutes by taxi, but on the way we meandered through the underground shopping bazaar, which was under construction when we were last there.

“Dakgalbi Street,” an alley dakgalbi restaurants side by side, is off the central Myeong-dong plaza, with its Winter Sonata memorial Christmas trees on each light pole. (The trees recall a scene from the drama.)

Hubby and I would come to Dakgalbi Street after our morning classes, so being back there was like 1997 all over again. But at that time, rather than trees on light poles, the recurring motif in the shopping court was the soundtrack to the hit TV drama of the time, Star in My Heart, seemingly on a continual loop from music store outdoor speakers.