Fish Noodles — On a Stick! 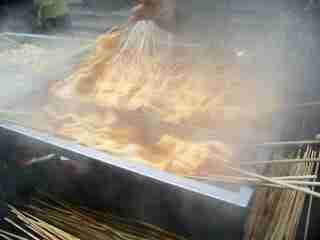 This seems to be the most common street food in Korea. There are others, but selling fish noodles, or odeng 오댕, seems easy to do. It’s low maintenance.

Odeng is pretty good unless you don’t like seafood. It tastes similar to sweet imitation crab meat. It comes in noodle form and shaped into sausage form. It’s great in soups and stir fries. And it’s a great street snack on a chilly winter day in downtown Seoul. 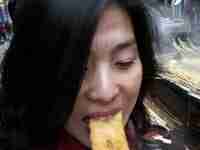 The method for eating odeng on the street is something I’m still trying to get used to. In other countries I have lived in and visited, you go up to the vendor, pay the money, the vendor gives you your order. At odeng stands, a patron walks up to the vendor, grabs a stick of odeng, and starts eating without even talking to the vendor.

Something in my primieval psyche tells me that’s rude.

Basically, you tell the vendor how many you ate, or the vendor looks at the number of sticks next to you. Yes, you could be a jerk and put your stick in front of the other guy while he’s not looking.

Eun Jeong and I were walking around Myeong-dong in downtown Seoul, and we were both peckish. This one odeng stand had a very hot spicy broth. The vendors also give patrons paper cups of the broth to drink. What I liked about this stand was that it had a crock of some soy sauce and onion based paste that I brushed onto my odeng with a paint brush. That was darn good and bumped up the heat another level.

A little while later, Eun Jeong wanted to try these other things. I had always seen them but was afraid to eat them because I had no idea what their content was (yeah, me afraid). She told me that it was flour and fish mixed with other ingredients, shaped, and deep fried. 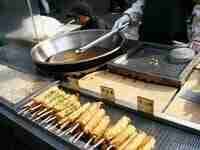 It takes a lot of patience to be my girlfriend. 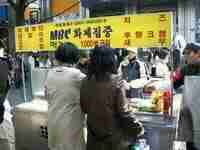 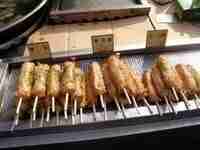 There was a variety of these things on display. We bought one flavored with Korean peppers. The vendor took one and added a line of ketchup and a line of honey mustard and handed it to us.

It actually tasted pretty good, even with the ketchup and honey mustard. I would order another one of those. 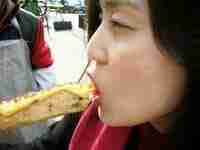 Of course, poor Eun Jeong complains that most of the pictures I take of her are of her eating.