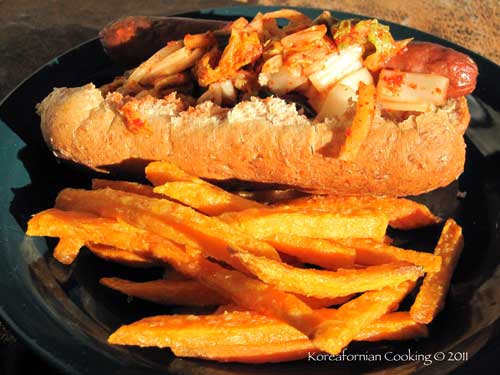 There’s arguably no food more recognizably Korean than spicy cabbage kimchi. But what is quintessentially American? Few meats are more so than bison. Hunted nearly to extinction in the 19th century, the American buffalo was brought back from the brink of extinction to such abundance that it is becoming more common on American dinner tables via dedicated conservation.

Chef Hector Marroquin of the Pupusa Griddle booth at the St. Helena Farmers Market in Napa Valley wanted to expand kimchi creations beyond his kalbi-style short ribs topped with kimchi made with a blend of local peppers.

Inspired by a picture of my husband eating a hot dog topped with kimchi, Marroquin “koreafornianized” the street food favorite hot dog topped with sauerkraut. He put a Native American spin on it by replacing the beef Kosher dog with a buffalo dog and swapping the kraut for kimchi. The spicy, garlic-forward tang complements the bold buffalo flavor.

Marroquin’s buffalo kimchi dog was a quick seller at the farmer’s market.

“The customers loved it, and did not mind paying $7 for a buffalo kimchi dog on french,” Marroquin told me.

But he ran into a serious problem making it a permanent feature on the menu.

Primarily, it was finding grass-fed, humanely raised buffalo hot dogs. The most promising source was the company who supplies the dogs exclusively to Whole Foods Market. Having to pay retail at $8.99/lb. took a big bite out of his profit margin.

Despite the setbacks, Marroquin featured the franks on the menu for several weeks, running out every time he offered them on the menu.