Every winter solstice, the shortest day with the longest night of the year, comes with red bean porridge (팥죽; pat juk or pat jook) in Korea – which has also become my annual habit from my childhood.

Red beans, also known as azuki beans, are often used in dishes that symbolize good wishes in Korea because the red color is traditionally considered to keep away evil spirits.  Red bean rice cake shows up on the tables of babies’ birthday parties, house warming parties and business launching parties, or any other occasion that would ‘require’ evil spirits kept far far away.

For the night of winter solstice, red bean porridge is prepared as a savory meal.*  Although many slight variations exist, dry red beans are soaked overnight then boiled (water after the first boil is thrown out to get rid of the bitter taste) until completely soft.  Fold in soaked rice, sweet rice, rice flour, or any combination of these and simmer until completely cooked while stirring often.  Season with salt.  Little white balls, called birds’ eggs (새알심; sae al shim), are made with sweet rice flour (찹쌀가루; chap ssal ga ru), hot water, and salt and added to the porridge to cook. 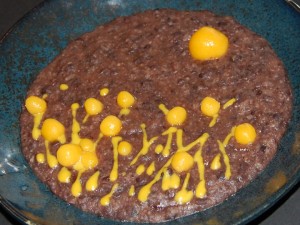 A friend of mine – Korean American – thought pat juk was a traditional Korean dish for Christmas as he remebered eating it every year around this time.  That was the cutest thing I heard about pat juk.

* If the date of winter solstice falls within the first 10 days of November by lunar calendar, which is this year, pat juk is supposedly not prepared because it’s considered bad for children.  Without getting more technical, this information, if widely known at all, never seemed to bother my mom.