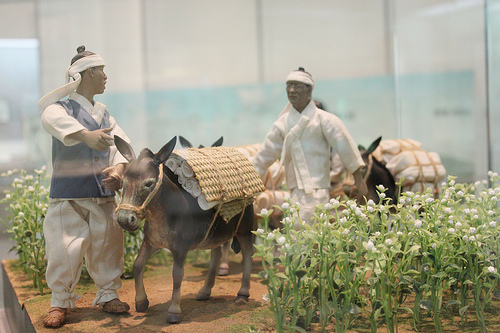 If you like chilled noodles, Pyeongchang’s the place. The host of the 2018 Winter Olympics has been frequently talked about as a sleepy resort town, but there is actually some history to it. Mainly, the culinary hero is buckwheat, known as memil 메밀. It was immortalized in the modern classic of Korean literature When Buckwheat Flowers Bloom by Lee Hyo-seok. The novel takes place in and around Pyeongchang, and it romanticizes the yellow moonlit buckwheat fields in the countryside. Be warned that it’s not the most accessible book to non-Korean readers, but it’s revered in the Eomoniland.

Buckwheat’s prominence in Pyeongchang almost seems like a tourist gimmick. But the food I’ve had there has consistently been good. Anytime I leave Seoul, I’ve noticed that the doenjang gets funkier and there’s less dependence (crutch) on the red sauce.

Yet here are the buckwheat dishes in full force. 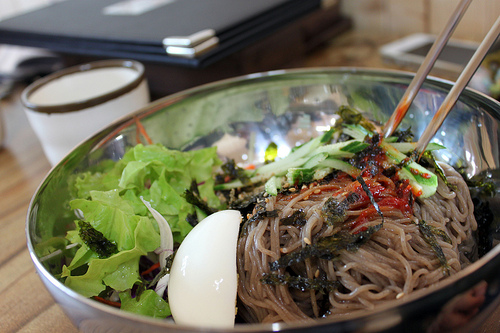 These buckwheat noodles are prepared much like naengmyeon. The difference between this and naengmyeon is the noodle texture. It’s much smoother. That can be a good or a bad thing, depending on how al dente you like your noodles. 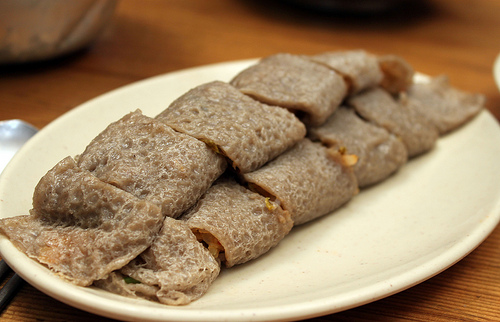 This was one of the more original dishes. Think of a buckwheat crepe wrapped around stir-fried seasoned cabbage. This wasn’t so bad, really. The crepes were silky, and the cabbage added a satisfying crunch. 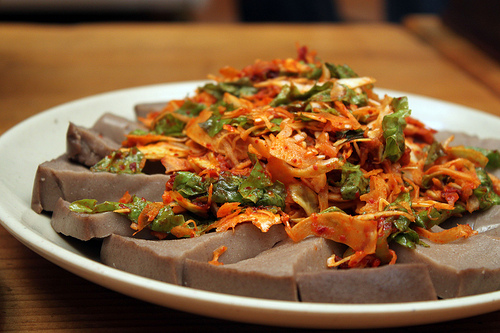 Buckwheat in jelly form, sliced and topped with a peppery cabbage salad. I’ve had mung bean and acorn jellies before, and I’m a big fan of acorn jelly salad. Where those two gave a definite gelatinous texture, this is more like a firm pudding. It’s creamy. There’s no distinct flavor, so that’s what the cabbage is for.

This was good and rustic, and I enjoyed watching this getting made. Two whole cabbage leaves join some spring onion in a hot oiled pan. Then buckwheat batter is ladled over it. That’s the simple rustic food that wins me over every time. 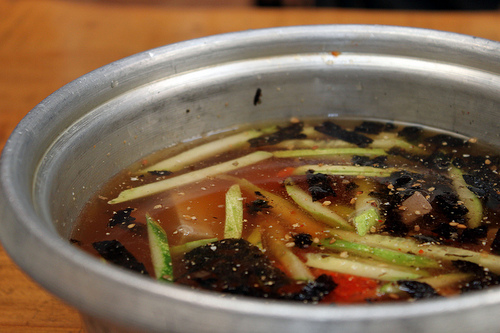 This had promise, and I’m sad to say I was disappointed by it. It’s the buckwheat jelly in a chilled tangy vegetable-laden broth. It’s like mul naengmyeon with the jelly instead of noodles. The broth just didn’t have much flavor, so it was bland against bland. 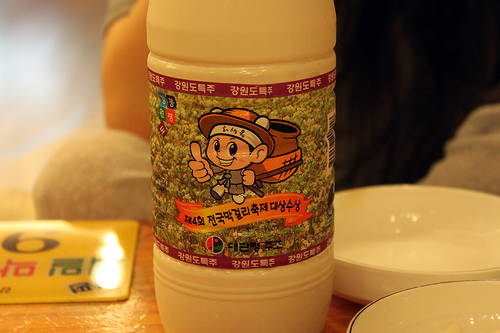 It’s Heo Saeng Won brand Buckwheat Flower Makkolli. By far this was my favorite buckwheat product in the region, and it was everywhere. It’s a makkolli rice beer that’s a bit on the sweet side–I’d say, floral. Great aromas.

Of course, there are a lot more foods in the area. But if you find yourself in Pyeongchang, you have a better idea of what to look for.

Also check out this blog post about Pyeongchang cuisine.