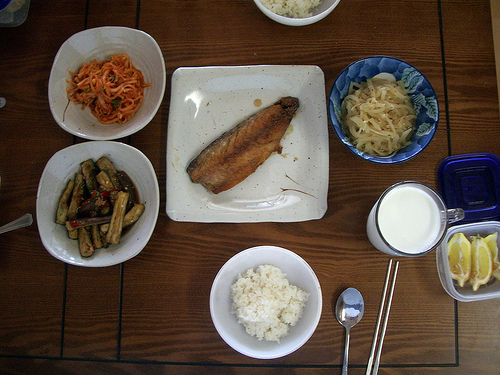 A typical lunch in the ZenKimchi household (Joe)

EDITOR’S NOTE: This post is from our new contributor, Deva. Check out her profile at the bottom.

Most days, I eat lunch with a group of Korean women. We don’t share a language but, like most Korean people, we share food. Having only lived in this country for six months, dining with them has been an education to say the least.

To gain an appreciation of Korean food, I needed to learn a new language for eating–a new way of decoding the dinner table. When I first arrived in Korea, I didn’t understand any of the food I encountered. Most of it was unrecognisable, and tasting became detective work. Much of the time, I could not translate the food in my mouth (much like Ovid in David Malouf’s novel [amazon_link id=”0679767932″ target=”_blank” ]An Imaginary Life[/amazon_link]). Sometimes a mouthful offered a hint of recognition–an ingredient that I could use as a starting point on my journey to identify the dish. But mostly, familiar flavours were absent. Being vastly different to what I am used to eating, Korean food made no sense to me. It just seemed lacking.

There was no salt on the table, no pepper, tomato sauce, or mayonnaise. Strange, I thought, that Koreans did not feel the need to modify the food they were served. In hindsight, I realised this was a rather naïve interpretation of Korean food.

I made a few rookie errors in my first few months here, including arriving at lunch on my first day without any rice. I avoided rice that day because I didn’t want any heavy carbs and there was an abundance of side dishes so I knew I wouldn’t go hungry. Young-Ju looked at me in dismay and, despite my protests, shared her rice with me. “It will be too salty”, she said.

What she was trying to explain was that my meal was simply not going to work. Rice is not just a tummy-filler but a base which is used to balance out the often intense flavours of each side dish. On another occasion, I heaped some dipping sauce–this one was an extremely salty mix of soy sauce, chili powder, and spring onions–onto my rice. You need only a tiny spoon of this to compliment the other tastes on the table, and I was none-the-wiser. I also tended to mix my rice and all the side dishes into a bowl each day. This worked fine on cafeteria trays, where there was a large section for rice, but I was baffled in restaurants, where rice is served in a tiny bowl. “Where on earth is the main plate?” I thought.

Once I came to learn the names of some Korean dishes, eating out felt like less of a minefield. I could hone in on the foods I liked and avoid those I had sparred with. Kimbap (김밥) was a new favourite, though I often dipped it in soy sauce as though it were sushi. Mandu (만두) was a great anytime food, and Bibimbap (비빔밥) was a reliable choice no matter how befuddling the menu. So I had some dishes under my belt. I was feeling comfortable and enjoying all these new gourmet adventures. But I still didn’t understand Korean food, least of all because I couldn’t read the menu. It was a while before I could comprehend that Korean food isn’t served as a dish. Koreans don’t order or serve one combination of ingredients, with perhaps an optional dash of salt or squeeze of sauce. This food is organised differently and eaten differently. I’ve grown a whole new palate in this country.

Anyone who has eaten Korean food knows it is served with many side dishes, or banchan (반찬). Banchan are not extraneous to the meal. In fact, a meal without banchan cannot even be classified as such, because it lacks fundamental aspects. A Korean meal cannot be broken down to any one core ingredient or dish. You would not find someone eating a bowl of plain rice, for instance. As I have learned from the women I share lunch with, a meal in Korea is a creative act. No two people have the same meal, despite sharing the same banchan. Each mouthful is a combination of rice, meat, edible leaves, sweet, salty, or spicy banchan and a dipping sauce. Mixing all these dishes on one plate would be a gastronomic disaster–an overload of tastes which don’t necessarily work together. Each taste is enjoyed in small servings and careful combinations. Lunch with these ladies may go as follows:

A spoon of rice and a smudge of ssamjang (쌈장)-–a soy bean and chili paste-–rolled up in a lettuce leaf.
A pinch of sweet and spicy anchovy, or myeolchi (멸치).
A mini omelette mixed with rice and gochujang (고추장), a chili pepper paste.
A bite of sour kimchi (김치) to balance out the grease.
A sprinkle of salted tofu on rice wrapped in a square of dry seaweed.

It often feels like I am having six meals in one. Ingredients and dishes are combined and re-combined with each mouthful, using a spoon, chopsticks, or your hands. There is no passive eating here. Each bite is tailor-made.

At first, I thought Korean people would be bowled over by some of the dishes I usually eat. The Western and African food available (the latter barely so) in Korea is often unimpressive and overpriced. Now, however, I think Koreans would probably find much of the food I am used to eating quite boring. It arrives all in one dish, with the same stock condiments available for adapting it to your tastes. And since it has no kimchi, they would probably find it, well, lacking.