When starting out your Korean pantry, the pastes are some of the most uniquely Korean components. At the Asian supermarket, I’m sure you’ve stared at that wall of green, brown, and red plastic tubs, wondering what they held inside.

Let’s demystify all that. 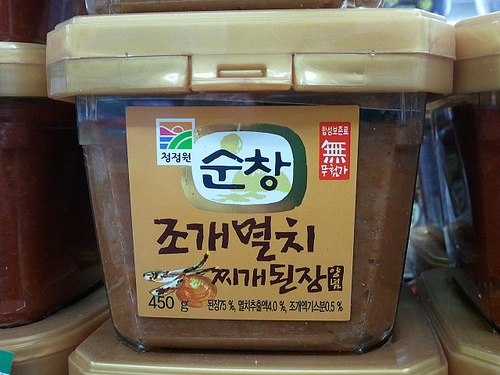 This is the brown stuff. It’s soybean paste. The closest comparison to other cuisines is Japanese miso. The difference from miso is that the Korean kind is much heartier and more rustic. I think of miso as feminine and doenjang as masculine. The really good stuff hits you with the complexity of a well-aged fromage. It’s used in soups, to season meats and veggies, to mix with rice, and to mix with other pastes. I think it makes a good dip for veggies–a healthier and punchier alternative to ranch dressing.

There are, of course, different types of doenjang, depending on its intended use. Pictured above is our favorite company-produced one. It’s for use in jjigaes (stews). See the little picture of the anchovies and clam. Those are added to this kind, giving it a slightly fishy depth to compliment the saltiness of the paste.

The younger version of doenjang is cheonggukjang 청국장 (pronounced “CHONG-gook-jahng”). It’s the stinkier kind and usually found in the refrigerator section in what looks like a yogurt cup or in a mudpie-like disc wrapped in plastic. 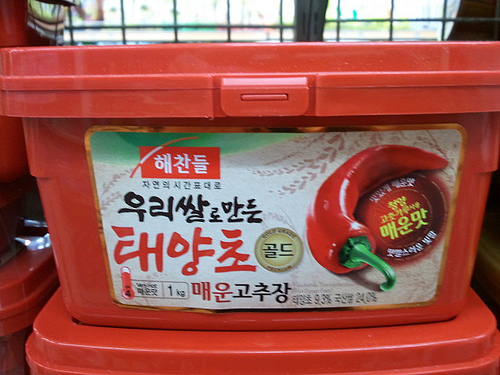 Gochujang is pepper paste. It’s spicy but not super spicy. That particular tub is a special spicy version, though. Gochujang is the go-to item in Korean cooking. Sometimes it seems like all Korean dishes are covered in red. That shouldn’t be the case, though. Traditionally Korean food should have many colors. Gochujang not only adds heat but also gives a salty, peppery, slightly sweet character to soups, sauces, marinades, and dips.

I suggest tasting gochujang with a small spoon when first exposed to it so you can evaluate for yourself how hot it is. It comes in different sizes. Start small unless you know you really have little access to stores selling it. You don’t want to be stuck with a giant tub of red stuff if you rarely use it.

Again, I like this as a dip, too. But I really like a dollop mixed with rice. 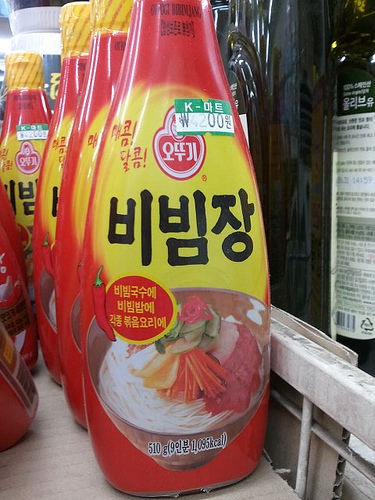 This is not a necessary staple, but I have this here in case you come across it and wonder what it is. This is a squeezable version of gochujang that’s good for rice and chilled noodles. Also good on burgers, hot dogs, and fries. 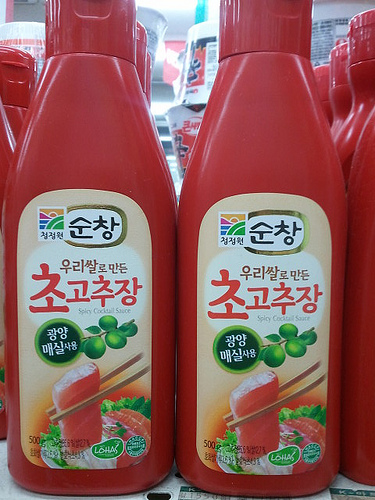 This is gochujang mixed with rice vinegar (shikcho). It’s specially seasoned for raw fish, hence the image on the bottle. Along with soy sauce and wasabi, this is served with raw fish. It’s taken me a bit to get used to, but now I prefer chojang over soy sauce with sashimi. Or one thing I do is mix chojang with a little wasabi and lemon to make a Korean cocktail sauce. Great with shrimp. 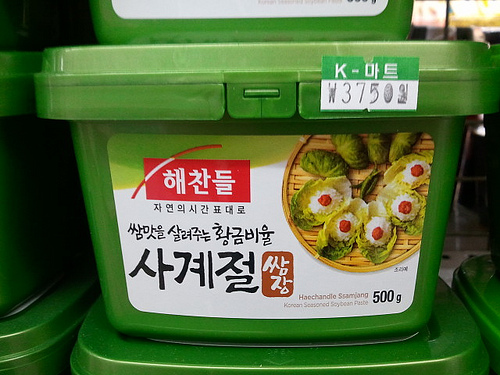 For me, this is the ultimate paste. It’s gochujang mixed with doenjang, garlic, sesame, and other goodies. It’s the sauce for your ssam–your lettuce wraps. But I use it on everything. Back when I was a bachelor, I would eat it straight out of the tub. It’s sweet, garlicky, pungent, a little stinky, and a slight bit spicy, almost like a peppery peanut butter. It’s not really good to cook with. It’s an aftersauce–a sauce for after you cook. This makes a great veggie dip for parties and backyard barbecues. Even the kids would like it (I guess).

I’ve seen gochujang and doenjang sitting out at room temperature in professional kitchens. Yet I also gather that they go through the stuff more quickly than you and I would. In our household, we keep them in the fridge. That little plastic flap under the lid you can still keep. Press it down on the paste after using to keep it from drying out, like the plastic film used in cartons of ice cream. These pastes last a long time, especially the gochujang and doenjang. Ssamjang has gotten moldy on me, but that had been in my fridge for a few years.

These really keep a long time.