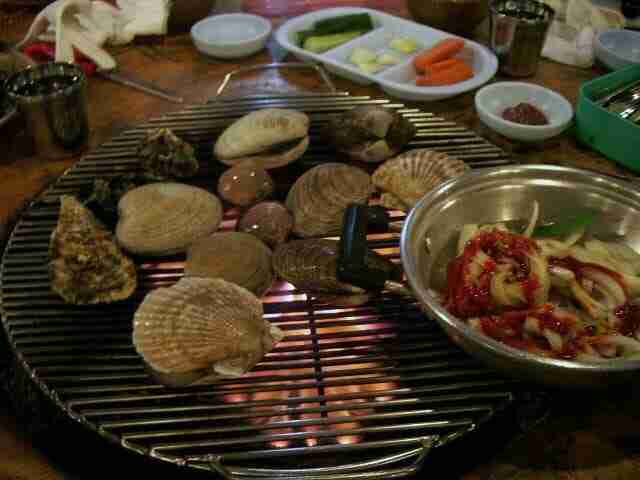 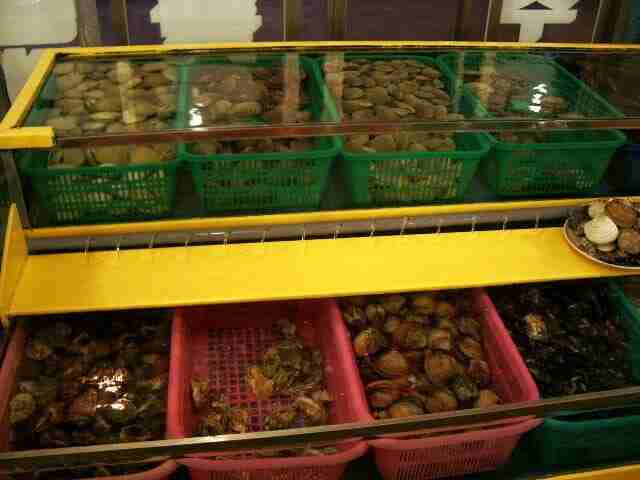 One mark of Korean cuisine is the thrill of grilling food at your table. There is something primal about a group of people getting around a fire and grilling meat. There’s also the added danger.

An old girlfriend introduced me to the ultimate concept, Jogae Gui 조개구이 on a trip to the beach in April 2004. There were live shellfish in a tank outside, and the staff would just put the live shellfish on the grill, where they would spit and spatter until they gave up and their shells opened slowly.

I had this again with a group of friends on a trip to Seoraksan Mountain and Seocho Beach in November 2004. There are bits of that in the videos. 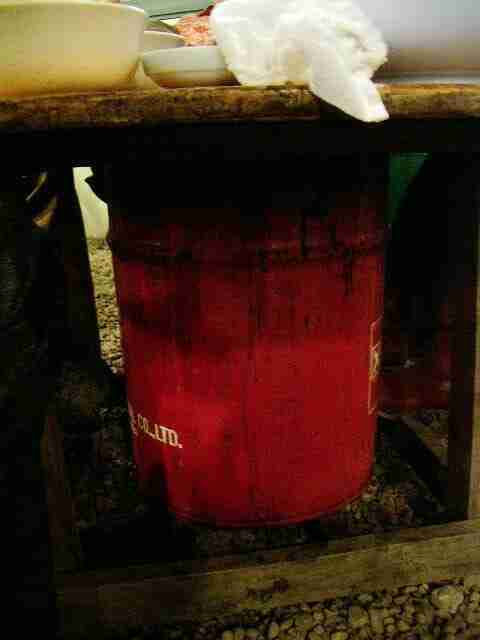 I had been always bugging my friends to go back and do the shellfish thing. They would joke and say that my catchphrase was, “Do you like shellfish?”

Recently, Injoo suggested we go to Oido, the closest town on the coast from us, to have jogae gui to celebrate his birthday.

On a Friday evening, Injoo, Lars, and I met two girls, who drove us to Oido. We entered the shellfish restaurant, and we could immediately tell that this was not an ordinary set up. For one thing, the floor was gravel. The tables were plywood boards constructed around old oil drums, which acted as grills. You can make one of these things at your house and entertain family and friends (I would). 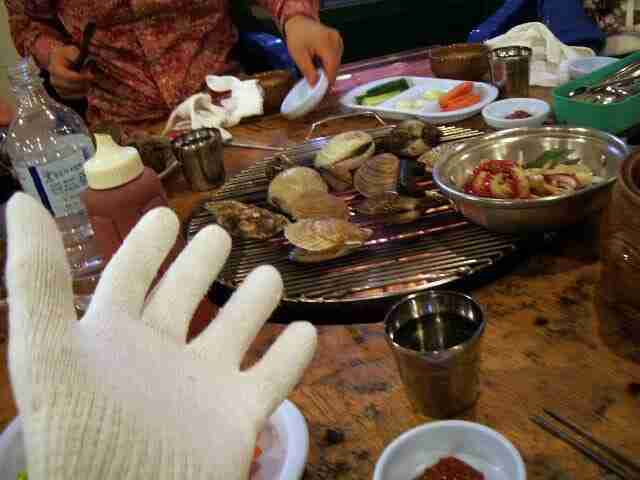 We ordered the shellfish, and they came out live. I mean LIVE.

Now, for a period in my life, I was a professional oyster shucker at a redneck bar. I don’t remember oysters squirming. But these shellfish, particularly the scallops, were opening and closing their shells like they were talking. 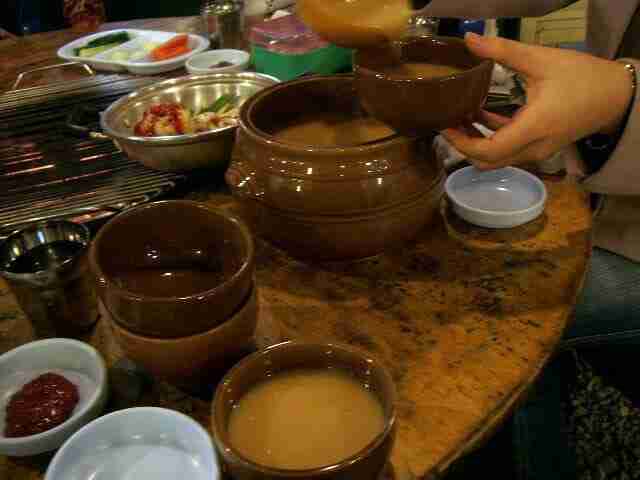 Injoo and I placed a few on the grill. We designated ourselves as the official shuckers of the party. To perform this task, we were given two work gloves, both of which we slipped onto one hand, and a butter knife. 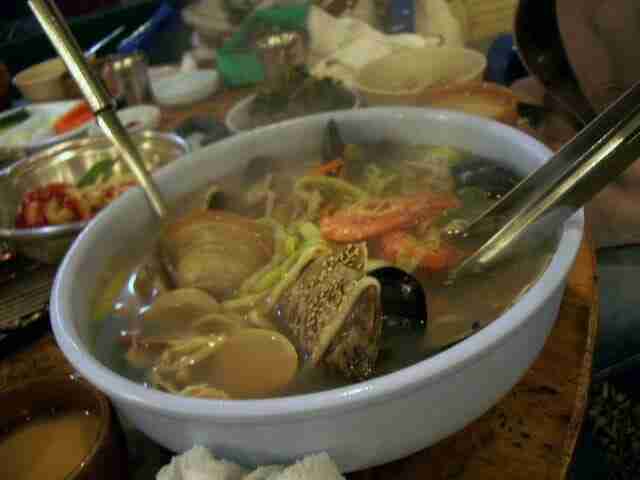 We had also ordered our favorite Korean home brew liquor, dong dong ju, which tastes like a smooth sake and tingles like champagne punch.

Along with the shellfish, the restaurant gave us a big bowl of Haemul Kalguksu 해물칼국수, which is a cloudy noodle soup filled with fruits of the sea. 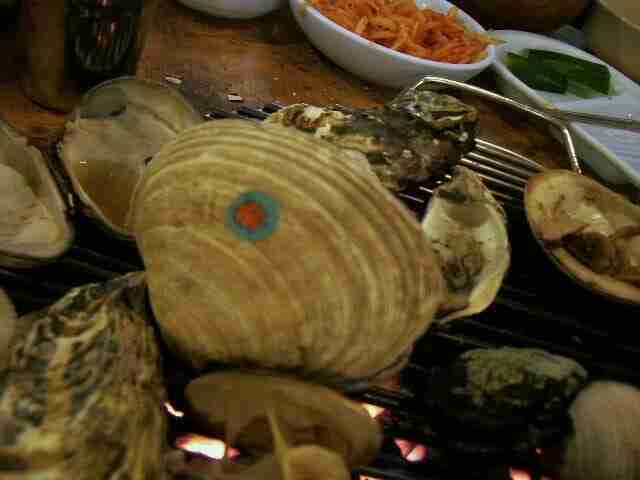 Even though we had sauces for the shellfish, they tasted best straight out of the shells, with the salty brine burning the tongue. I personally liked the oysters best.Nonetheless, we did give a scallop a sticker for being such a good sport. Oysters in Korea are brinier than any I’ve had anywhere else, even though they’re a tad smaller.

Dealing with these buggers can be dangerous. I was so hungry while shucking these that I easily forgot that I was taking them off of a blazing charcoal fire. A few times the hot juice soaked through my glove and sizzled my finger. It’s been a week, and one of my fingertips is still sensitive from the burn.

Injoo got himself burned, and I got it on camera.

To end the meal, Injoo held the bowl of Kalguksu to the sign advertising it as a salute and tribute. We left the restaurant with nothing behind but a small graveyard of shells. 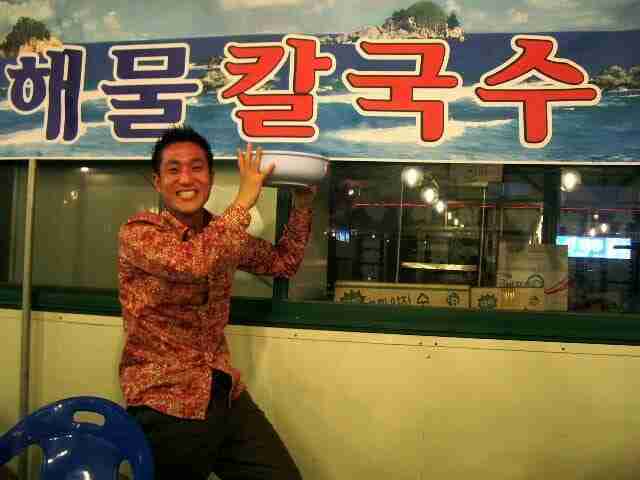 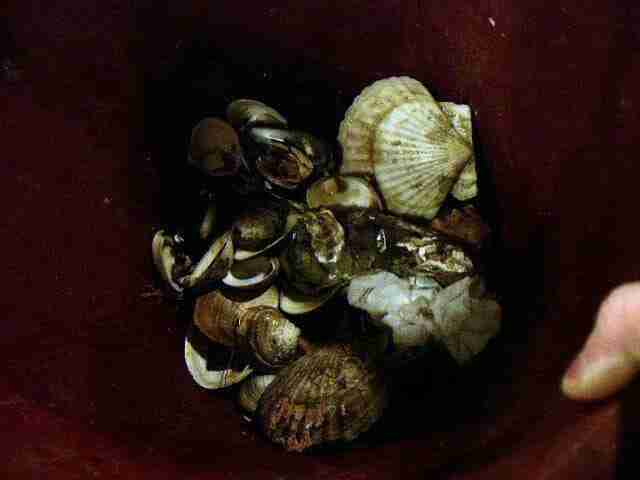