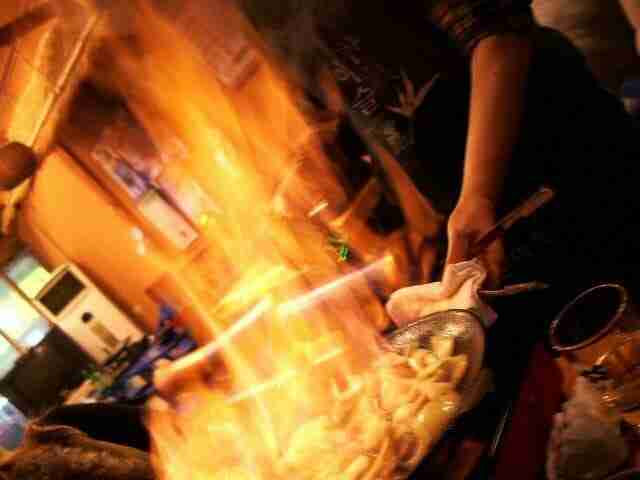 I grew up in the South. Part of Southern soul food culture is chitterlings, more commonly known as chitlins. I honestly had never tried this delicacy before coming to Korea. Then again, I hadn’t even heard of fried green tomatoes until the movie came out.

In the summer of 2004, Brant and I were sitting outside at a samgyeopsal place. We observed this restaurant next to us, which would flame something in a pan with soju. We decided to check this out.

Back then, my Korean was even worse than it is now. We had no idea what we were ordering on the menu. The waiter made sure that what we ordered was what we wanted. He then came out with this pan of vegetables and what looked like elbow macaroni. He proceeded to heat up the pan and flambeed it with soju.

I took one of the macaroni pieces and examined it.

“Brant, um, I think these are intestines.”

It was then that we were hooked. Grilled intestines, to us, taste like good old fashioned breakfast bacon. The restaurant mixed it with liver and onions and stuff. Made it the ultimate man food.

Six months later, I moved to the Sillim neighborhood in southern Seoul. Sillim is a pretty rundown area and is famous for one thing: sundae gobchang bokkuem. This is blood sausage and intestine stir fry. The first time I went to one of these places, I had to beg my girlfriend to come along. Even though she had already eaten dinner before meeting me, she ate a lot of the SGB in our sitting at the famous pink restaurant. I later introduced Brant to it, and Brant introduced everyone else to it. I have a video of one night there.

When I moved to Anyang, we found a branch of the famous pink restaurant there. We also found a basic gobchang restaurant in the area, which was fairly expensive.

Recently, we went back to the original place in Ansan, where I first tried this delicacy. It is still the best place I have had gobchang. Lars had instantly become a fan of it early in his stay in Korea, thanks to Injoo and me. He agrees with us that this place in Ansan is the best place for gobchang.

While we were waiting for our order, the waitress asked if we wanted any “gan.” I knew gan meant liver. I said, “Sure.”

She came out with a bowl of cubed RAW liver. We tried it, and despite the gelatinous texture, we liked it. Especially when it was dipped in one of the sauces.

The pan of gobchang came out, and the waitress flamed it with soju. We had to order extra, it was so good. Crispy on the outside, salty, bacony goodness.

As with any good grilled dinner, we had the option of taking the leftovers in the pan and making a fried rice with them. Rice was added with more vegetables and dried seaweed to make a heavenly send off to a great meal.

Forget sashimi. This is our new special treat for a night out.