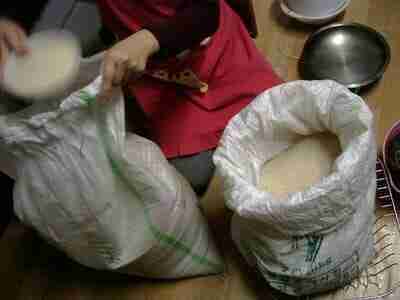 Our new shipment of rice has arrived.

Seriously, that’s all ours. It’s too big to fit in our cabinet by itself, so Eun Jeong and I split it between two sacks. The old sack was almost empty, and when we got it back in July, it was as full as that big mother.

Are we really eating this much rice?

And to think that until maybe ten years ago, I didn’t like rice. Blame that on a tragic rice pudding incident that I shall not elaborate on right now.

In America, we buy rice in little bags. And even then it takes a while to get through those.

Did I mention how I can’t believe how much rice we eat these days?

Rice came to Korea from southeast Asia by way of China a few thousand years ago. A unique feature of Korean rice is the frequent addition of other grains and legumes to it. This was more pronounced during the Japanese occupation from 1905 to 1945. All the prime rice was sent to Japan and the Japanese army. Koreans had so supplement their rice with other grains or use those grains exclusively. A household was considered rich and lucky if it had white rice during those times.

Barley, millet, black beans, and soybeans find their way still into Korean steamed rice. We eat that frequently in our household, and it adds a lot more character and nutrition.

But my goodness. We really went through that much rice in five months?