The End of Naengmyeon Season 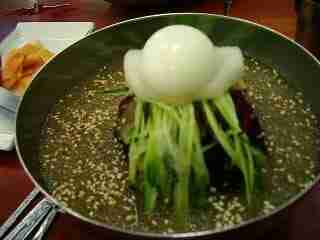 People who know me have heard about my love of Naengmyeon, chilled buckwheat noodles. I especially like Mul Naengmyeon, where they’re swimming in an slushy slightly sweet beef broth with cucumbers, radishes, Korean pears, a hard-boiled egg, and sometimes a slice of beef.

What is it about this stuff that makes me crave it so badly?

I guess it’s because cold noodles are such an alien concept to North Americans. Cold soups are limited to gazpacho. I personally was turned off of Naengmyeon at first, mostly because it followed a galbi meal (I was already full) and also because it was Bibim Naengmyeon. Bibim Naengmyeon is the noodles without the broth, which are instead smothered in red pepper paste.

I think that the soupy stuff gives more of a satisfying feeling. I really just slurp the noodles as quickly as possible to get them out of the way. Then the best part comes. I take the cold stainless steel bowl to my lips and drink the sweet and tangy broth. It’s like diving into a swimming pool. If I’m fast enough in eating the noodles, there’s still shaved ice in the soup when I drink it. When I start drinking it, I can’t put the bowl down. It’s so peaceful and cool that I don’t want to leave.

Naengmyeon is also one of those dishes people passionately love or passionately hate. Eun Joeng herself grew up not liking Naengmyeon. Her dad loved it, though. Only recently did I teach her how to enjoy it. Yes, I convinced a Korean to like Korean food. There’s one restaurant near Beomgye Station in Anyang that serves the best Mul Naengmyeon I’ve ever tasted. The broth has the perfect balance of sweet and tangy. They slosh it full of shaved ice. And they sprinkle the top with toasted sesame seeds. Eun Jeong tried it for the first time in July and fell in love with it immediately. She was getting the same Naengmyeon cravings I had.

An interesting bit of information about Naengmyeon is that it wasn’t always a summer dish. It was eaten in the winter and was invented by — North Koreans. Really. It’s maybe the only good thing to come out of North Korea. In fact, the Mul Naengmyeon I like and most people are familiar with is known as Pyeongyang Naengmyeon. Restaurants actually take pride in boasting they have authentic North Korean Naengmyeon.

Okay, if you can wrap your mind around that.

The weather is cooling now. The summer heat was all too short, in my opinion. My cravings for Naengmyeon are dissipating. Last Sunday, Eun Jeong and I returned to the Beomgye Station restaurant and had our last Naengmyeon of the season.

On the bright side, the end of Naengmyeon season means the beginning of oyster season.

Nonetheless, here’s my small tribute marking the end. Until next year, cold noodles. 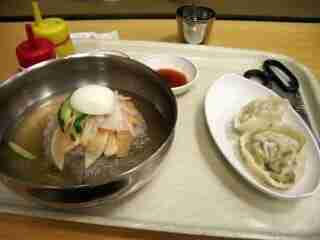 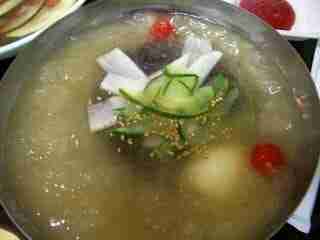 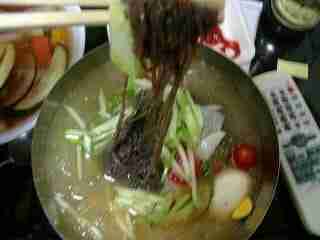