Woke up with a bit of a hangover this morning–and late–so I got out the door craving some junk. Taco Bell is next to my subway station. Walking up, I noticed this. 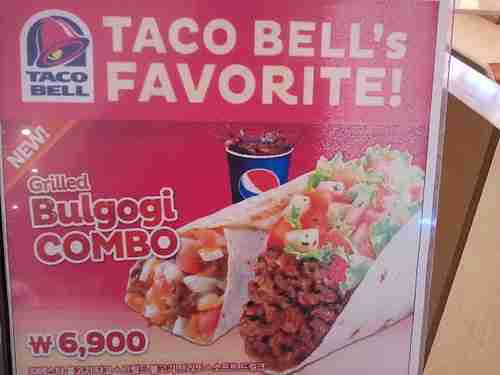 And here’s what it looks like in real life. 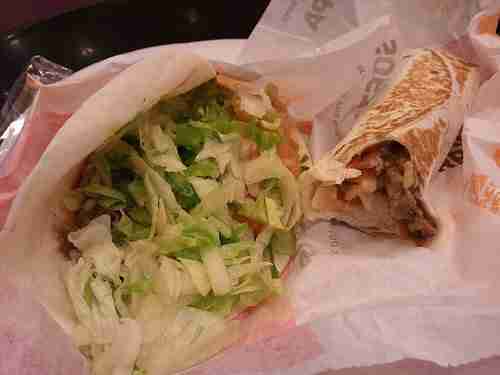 There are ample veggies in the taco. The burrito had the meat with some rice and cheese. The meat definitely tasted like bulgogi. Sweet. The texture was not like the usual powder-fine ground beef product but something more mushy. These are hardly the gourmet taco truck munchies. What it did was bring me back to my old bachelor days in Korea, cramming bulgogi into tortillas long before the Kogi truck was even though up of. It’s perfectly simple, unpretentious, junky, and satisfying. And it didn’t taste like Taco Bell much at all. Though the personal liberal squirting of Fire Sauce made it much better by countering the sweetness.

The whole time I was eating my meal, I thought how funny things were. Years ago, people said I was weird and disgusting for putting bulgogi in burritos and kimchi in quesadillas. Now it’s so mainstream it’s at Taco Bell.

Conclusion–Not stellar, but I’d eat it again. Tastes better than anything else at Taco Bell. And way more edible than the monstrosities from Paris Baguette.