Can Jian Eat a Patbingsu Bigger than Her Head? 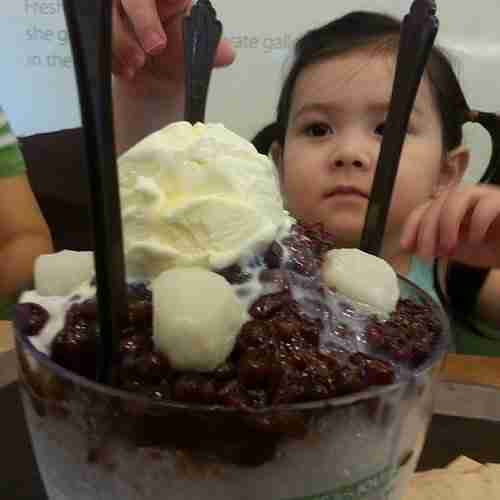 It’s summer! Patbingsu season has arrived. It looks like we’re again seeing more fruity variations on the shaved ice treat. Still, the English translations are not using the obvious “shaved ice” moniker and are going for the awkward misleading names of “ice flakes” and “sherbert.”

Maybe it’s just me, but the prices seem to have relaxed a bit compared to last year’s glut of W9,000 to W13,000 bingsu. The ones at Paris Baguette and Tous les Jours run from W6,500 to W8,000. The one in the shot was from Tous les Jours and ran, I think, W7,500. It was big, too. I’ve also noticed a bit of a movement to move back to traditional yetnal patbingsu, despite what I just said about a larger variety of fruit flavors.