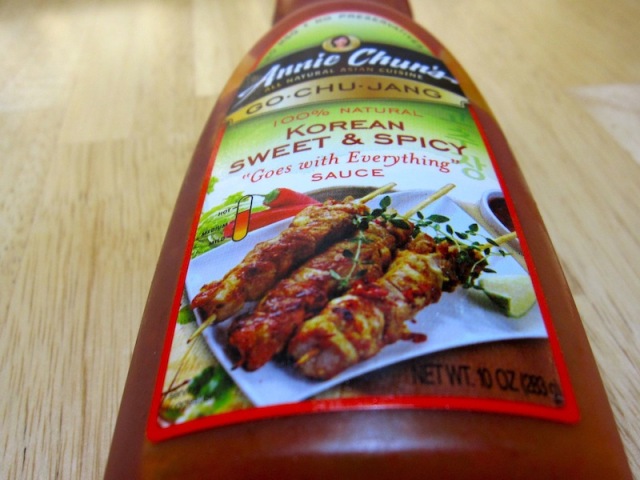 Since December 2009, Annie Chun’s — yes, she’s a real person — and CJ Foods stirred up some controversy over the debut of Annie Chun’s gochujang sauce in the U.S. And some in the Korean blogosphere have been gnashing their teeth over this potential corruption of Korean cuisine and they haven’t even tasted it yet.

Even stores in Northern California, her American home turf, that stock other Annie Chun’s products don’t yet have that sauce. So, I bought a six-bottle case from the brand website, and five friends helped judge the culinary merits of this new sauce. Only one is somewhat a Koreaphile. Most have little to no prior experience with authentic cuisine.

I gave each of them a bottle to test any way they saw fit, provided they would report with what foods they tried it and how the sauce complemented or clashed with their meals.

The first to report was my Koreaphile friend, whom I will call “M.” She and her equally knowledgeable husband — whom I’ll call “J” — put the gochujang through the paces, testing it on everything from omelets and pizzas to honeydew melons. They even tried it on a mutual friend of ours — whom I’ll call “S” — and M’s father in law — whom I’ll call FIL. That’s plenty of feedback for a free bottle of sauce.

Here are a collection of comments:

Hope that was helpful. We’ll finish the bottle for sure. Not sure if we would specifically go out and buy it. We’ll see.

The next report came back from my friend “L,” who said:

I thought the level of spiciness was good. There’s a real sweet initial flavor followed soon after by the heat. I thought it lacked an identity though, in other words, I wouldn’t know how to use it. The flavor isn’t such that I would use it in American dishes we generally make (I’m thinking of meat/barbeque in particular), and doesn’t have the right flavor for Asian dishes we eat. My husband  said it doesn’t taste authentic. He did say it might be something he would use as a dipping sauce, for instance, for lumpia.

YUMMMM! I was worried the spicy would take away from the flavor, but it wasn’t too bad. Not for anyone who doesn’t like spicy though. I give it a thumbs up!

The most fascinating critique came from the husband of another friend. He said the sauce was “too Korean.”

At first, I was at a loss on how sauce clearly labeled “Korean sweet and spicy sauce” can be “too Korean.” Then I had a flash: A fundamental flavor of Korean recipes is sesame oil. However, some people have a real aversion to that pungent ingredient, even in small quantities. This blend of gochujang has sesame oil and seeds, and it was enough for him to know that the sauce was “too Korean” for his taste.

In sum, this gochujang is accurately named: sweet with a bold but not overwhelming spiciness.