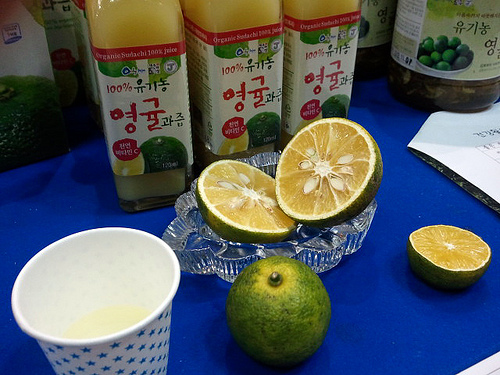 One of the greatest longlasting gripes of expats, chefs, and especially bartenders in Korea is the utter non-presence of limes. Whenever I see limes at a Mexican restaurant or bar, I ask where they got them. They get a sheepish look and say they have a connection with the U.S. Army base. Most of the limes in Korea are smuggled from military bases or bough on the black market.

We always wondered why limes were so hard to find. Lemons are everywhere. Is Korea–known for being an extremely protectionist economy despite multiple recent FTA treaties–trying to protect some market? Is there really zero demand for limes despite screams from bars and restaurants?

I was exploring the Korea Food Expo, and I wanted to see the Jeju section. One of the men in charge noticed my interest in a lot of products and took it upon himself to show me around. He pointed to one section.

These fruits were green like limes. They were sort of shaped like limes. They handed me a cup of juice. It tasted more like limes than lemons. Actually they tasted closer to the yuzu juice I got from Fukuoka, Japan. I was very excited. I guess I showed my enthusiasm in the extreme because they gave me a free care package of juice and tea.

In Korean they’re called yeonggyul 영귤 (pronounced YOUNG-gyool). They have started growing these in Jeju, and one of the hotels on the island is already using them. After researching online, I found that they are called sudachi and are related to yuzu and kaffir lime. They mostly are grown in Japan’s Tokushima prefecture and are harvested in the fall. According to Wikipedia, it’s considered to have a “zestier flavor and aroma” compared to lemons and limes.