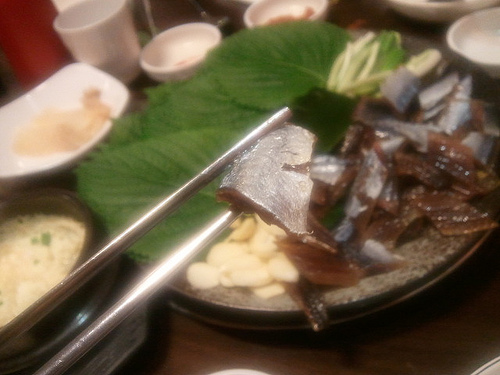 Soo-jung always introduces me to things I’ve never tried before. You may remember her from the Korea episode of “Bizarre Foods with Andrew Zimmern.” She was the one who was with him at the doenjang farm, the kimchi factory, and famously at the fermented skate restaurant. She introduced me to fermented skate many years ago, too. She admits, though, that she hates it herself.

I hadn’t seen her in a long time, so she, Chef Colin, and I went out for some dinner and drinks. After some lamb galbi, we went looking for some more food. It occurred to her to get some Gwamegi 과메기. She hailed a taxi, and we rode a few blocks over into Pyeongchon to this hui restaurant. She ordered up some Gwamegi and soju. Out came these semi-dried mackerel chunks with the usual leaves, garlic and sauce for wrapping.

I had seen these a lot over the years, and I may have had one or two in banchan, but I never paid them much attention. As a drinking food, they’re awesome. They’re in season in mid-winter, and the place that specializes in them is Pohang, off the southeast coast near Gyeongju. Actually, that’s where my sister-in-law lives.

Gwamegi is for people who like their oily fish and who like their fish oily. Sardines, herring, any Spanish fish tapas that come in a can. Not really date food unless you’re dating a mermaid. The taste stays with you for a couple of days. But I am craving these little fishy chunks again.

You know that they’re packed with all those Omega-3 fatty acids–so it’s healthy drinking food! 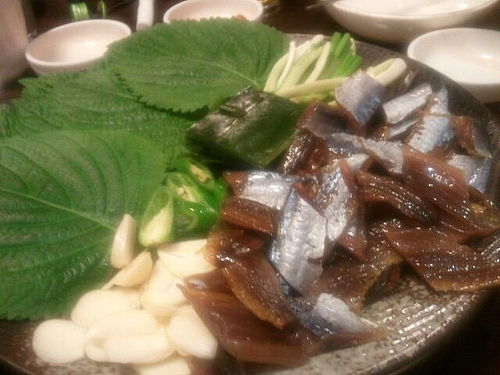 Photos taken with my Galaxy S. I need to clean that lens.