I didn’t realize how much I liked sweet pancakes for brunch until I started my food diary.  A mix of flour, baking powder, sugar, salt, milk and egg is ladled on a pan to cook, then maple syrup and toasted walnuts are in order for serving.  Some days, I play with different flours in different ratios.  Any mistakes in flour ratios are masked by maple syrup.  It defines a slow, lazy morning for me.

On a particularly wintery morning, hoddeok (호떡) came to my mind.  Hoddeok is a popular street snack (it’s surprisingly difficult to find a good picture of a typical hoddeok stand, but the link will give an idea) in the winter time in Korea – a thin pancake stuffed with brown sugar syrup, cinnamon powder and nuts at the most basic level.  I used to munch on hoddeok on my way home from school.

Making hoddeok requires a mix of flour, sweet rice flour (찹쌀가루; chap ssal ga ru), yeast, sugar, salt, water and oil which is kneaded then kept warm for the dough to double its size.  After dividing the dough into individual hoddeok size, it is carefully stretched to hold the stuffing of brown sugar and nut pieces in the middle, sealed, then pan-fried.  It requires some practice to figure out the right amount of stuffing that oozes out when you bite into hot hoddeok vs. that just oozes out to the pan in the middle of cooking. 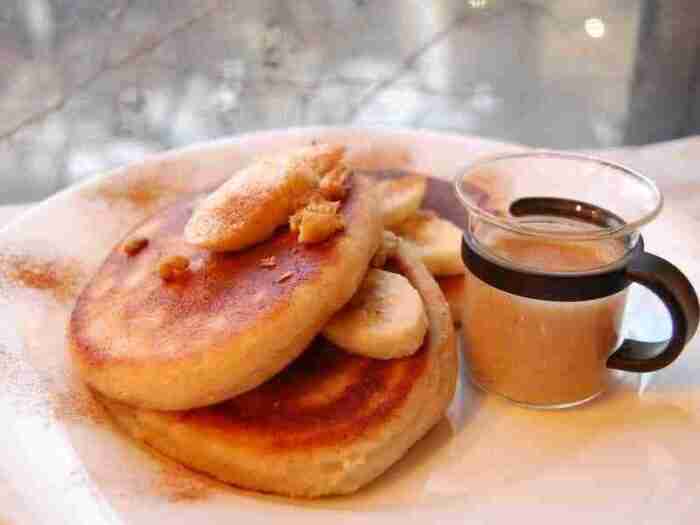 For my hoddeok stuffing at home, I mixed a crushed ripe banana with brown sugar, cinnamon powder and toasted walnut pieces.  I also prepared a side of banana cream (banana, heavy cream and cinnamon powder) to pour over hoddeok.

As a side note, I suggested a Sunday brunch for a blind date with a Korean guy a while ago.  He shuddered at the word ‘brunch,’ which to me is usually the first meal that happens anytime between morning and late afternoon on weekends.  The concept, I learned later, was widely introduced to Korea from Sex and the City along with certain images the show portrays.  Only if he knew I was having hoddeok for brunch…

By the way, what happened to the endearing colloquial term ‘ah jeom,’ a mix of words for breakfast (아침; ah chim) and lunch (점심; jeom shim)?