I showed up a bit late to the temple cuisine bistro. Too late. The plates were covered, and they were packing up the food. So, that didn’t pan out.

I needed some lunch, but I didn’t want to break the Korean vegetarian streak I’ve been on. I suddenly got a craving for cheonggukjang.

Boritgogae Chu-ok, next to the Ssamziegil complex, has a good lunch menu. The catch is that they only advertise that on their Korean menu. I walked in, and they sat me down, handing me the English/Japanese menu. I reached over to the next table and took the Korean menu. They  had cheonggukjang for W6,000. 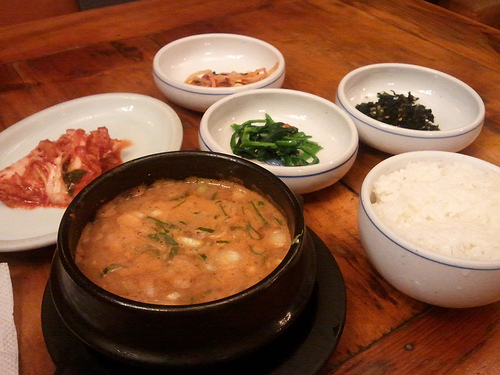 It didn’t take long to come out. I love this stinky soybean paste soup. It’s more proof that acquired tastes become addictive tastes. There were some freshly sliced leeks in the soup–and I could have sworn I tasted cilantro, but there was absolutely no cilantro in there. The banchan were some seaweed, spinach, bean sprouts, and the sweetest kimchi I’d ever tasted. It was like cabbage candy.

This meal was not temple cuisine, and it wasn’t completely vegan. Some seafood products had to have been used in the soup and kimchi. But it was mostly vegetarian. So I didn’t stray too far.