Trying to do something new. Our office near Insa-dong is a short walk from Baru Gong, the Buddhist temple cuisine bistro. They have a W7,000 lunch buffet. Being Buddhist temple cuisine, it’s mega-vegan. I’m trying to take better care of myself–mostly. I tried to go vegetarian in college, and I ended up in a hospital emergency room. No real evidence that it was vegetarianism, but I was definitely malnourished.

So, I’ll go half-ass like I always do. I’m going to try to go four weeks eating Buddhist temple cuisine for lunch. And document it here.

(“Oh, joy! Another food blogger taking pictures of his lunch.”)

Yeah, I know. But some of it is interesting, and I thought I’d share a bit of what can be served as temple cuisine. Baru Gong itself is not fancy at all. It’s like a cafeteria. But the past few times I’ve been there, the food has been good and filling. And filling is a big thing for a carnivorous vegetarian. They try to educate diners a little bit about temple cuisine and the baru itself, which is the temple meal. Diners get a regular china plate and bowl. But on display at the buffet is the black lacquer wooden bowls, which fit inside each other like Matryoshka dolls. One is for rice, one for banchan, one for soup, and one for water. I wish they had more info on the meanings behind temple cuisine, like a trifold info sheet on a table about basic concepts. Eating meditation. The philosophy of not killing whenever possible–as in, the bee doesn’t kill the flower to make honey. And the notion that no bit of food is to be wasted. That’s one that doesn’t get through to diners, as I see plates and bowls with leftover food when I go to put mine away.

I’ve done articles on temple cuisine, have even given a lecture in New York. I’m not Buddhist, but I find it intriguing. I do find that I tend not to have my involuntary afternoon desk nap after a temple lunch. I do start getting a little peckish around four o’clock. But I have a remedy for that in the next post. 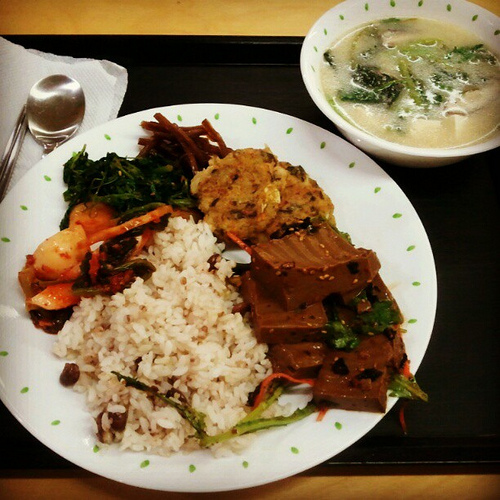 Being a buffet, it ain’t gonna look pretty on the plate.

Mixed Rice: Rice mixed with beans of different types. This is a typical Korean way of stretching the rice while adding protein. I like the earthy tones the beans add.

Radish Kimchi: Being temple cuisine, no fermented fish products are added, so fruit extracts are used to get the fermentation going. This was heavy on the ginger, which I liked.

Bireum Namul: I had to research this. The closest I got was Amaranth. It’s a tender wild herb.

Nokdujeon: Mung bean pancakes. These are basically the same as bindaeddeok. They remind me a bit of cornbread. I wish there was a soy sauce to dip them in.

Acorn Jelly: When done well, acorn jelly can be very good. This was done a little similar to San Maul Boribap near my house in Anyang with lots of sesame. The texture of the jelly was softer and more rustic than usual.

Perilla Seed Soup: The secret to making temple cuisine taste good when you can’t use any animal products, garlic, or onions is liberal use of ddeulggei. Some call them perilla seeds. I prefer “wild sesame.” The soup had some bright greens and a hearty tofu with actual flavor.