Makkolli is not a Rice Wine, Dammit! 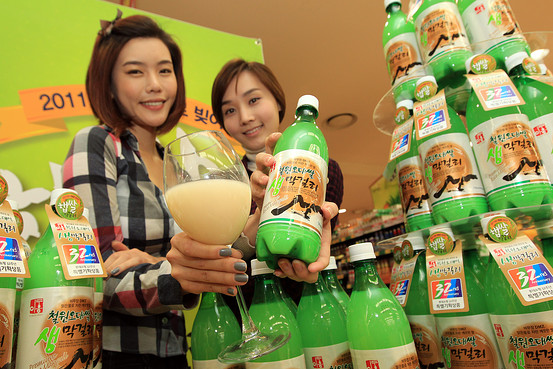 Which makkolli is anything but!

In fact, the English term “wine” is protected by law in many places around the world, and makkolli doesn’t fit in those laws. Yet all that aside, it doesn’t do justice to what is a phenomenal brew. It should be respected. It shouldn’t be a round peg being forced into a square hole. Here is why makkolli is not a rice wine but is closer to being a rice beer.

Wine is a process of natural fermentation from the yeast and sugars in fruit, particularly grapes. Rice beverages get their alcohol from starch that is then converted into sugars and mixed with water. In fact, rice is sometimes used in the making of barley and wheat beers because it’s a grain. You never hear of rice being used in making wine.

On the etymology front, the word “wine” comes from the Old English win, which comes from the Proto-Germanic winam, which comes from the Latin vinum. The Online Etymology Dictionary basically says that the roots for “wine” and “vine” come from a lost Mediterranean language word. The word “wine” has always been associated with things grown on a vine. Last I checked, rice does not grow on a vine. Now the origin of the word “beer” is fuzzy, but it does cross paths and has associations with words for “brew.” And makkolli is a brewed product.

“But wait,” you may say, “Sake is made from rice and is called a ‘rice wine.’ And what about barleywine?”

Good point. And experts have been working to change that too. It’s not appropriate to call sake a “rice wine” either. It’s a grain alcohol that is brewed and prepared more akin to beer than wine. I say more akin. Barley and wheat beers have a two-step fermentation process where sake has a one-step process.

Regarding barleywine, it’s called so because its alcohol content is close to wine, but to quote good ole Wikipedia, “Since it is made from grain rather than fruit, it is, in fact, a beer.”

Barleywine is a “wine” about as much as head cheese is a cheese. The closest argument anyone can give for saying sake and barleywine are wines is that they have a wine-like alcohol content, which makkolli has not. It’s between 6 and 8% alcohol, which is closer to an ale. So you can’t lump makkolli in with sake in this category and call it a wine.

Certain wines can improve with aging. That is why the vintage is printed on the bottle. You would never hear of anyone looking at the plastic makkolli bottle, saying, “Oh, this makkolli is from 2008. That was a good year.”

The reason is that makkolli, like beer, has an early peak time. Then it degrades–quickly. I’ve been told it has an even shorter shelf life than beer, even though makkolli producers are working on ways of extending it.

Also known as nongju because of its association with farmers (nongbu). It was a drink that could be gulped to quench a thirst from a day working in fields. It contained nutrients to give the farmers energy for a long day. Beer has a similar historical use. It was drunk on the farms in North Africa, the Middle East, Europe, and America as both a thirst quencher and, well, a source of food. “Liquid bread.” Even though wine can be best in European countrysides, it wasn’t drunk in the fields unless it was watered down heavily.

In short, wine you sip. Beer and makkolli you gulp.

So what is it?

Well, let’s see. It’s made from grain. It has a low alcohol content. It has a short shelf life. It was traditionally used as a nutritious thirst quencher for farmers. It’s carbonated. It’s gulped and not sipped. It’s basically a beer–or to be more precise, an ale. The one significance difference is its riceness. It doesn’t need to be malted like barley beer.

“Who cares,” you may say. Well–why bother classifying anything in the first place? If you’re going to classify something then be as accurate as possible. Don’t take the lazy route and call everything made from rice “rice wine.” That’s more marketing speak from promoters and government officials who–again–are too ashamed of their own cultural products to call them for what they are. They have to elevate them. Remember that despite what this story says, the government promoters ignored makkolli as a low-class beverage until they noticed that young Japanese and Korean hipsters were drinking it. Then they took it over and put it in frilly clothes by tossing it into stemmed wine glasses and wine carafes.

I call bull. It’s pretentious posturing from a few insecure people still stuck in a colonial mentality of needing to impress whom they perceive as highly civilized.

Makkolli is a rice ale. And it’s awesome!

Here is a good Tumblr post on the subject by The Makgeolli Diaries.