Is American soju 'watered down'?

Twitter makes it so much easier to “eavesdrop” on conversations of random strangers, which I do via a list of search terms related to Korean cuisine. For every person who asks a question, many others have the same one bouncing around their minds. Even random comments that don’t ask a question, but should ask a question, sometimes catch my eye.

#Soju can be sold in Calif. and New York, but it can only contain 25% alcohol or less. In #Japan and #Korea it contains 45%. 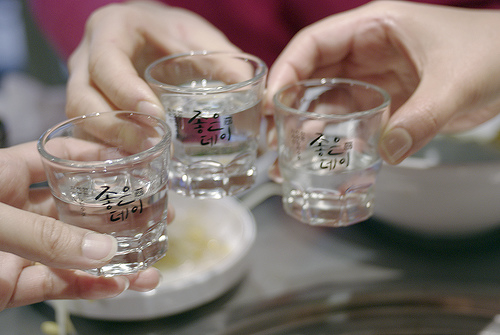 Is that shared soju experience the same in Seoul as it is in LA or NYC? (Leana photo, creative commons license, flickr)

Yet neither asked, “Why is the alcohol content of soju imported into the United States lower?” It’s another one of those answers that doesn’t fit well into a 140-character tweet. It has to do with whether you consider soju and Japanese sake as a rice wine or as distilled alcohol. (Some soju is made from sweet potatoes, tapioca and grains in place of or in addition to rice.)

The U.S. Alcohol and Tobacco Tax and Trade Bureau considers soju a distilled alcoholic beverage. In August, a 42-year-old Virginia soju importer pleaded guilty to smuggling, money laundering and tax evasion for claiming soju was “rice wine,” avoiding nearly $102,000 in excise taxes on $2 million worth of shipments. Under U.S. law, distilled spirits are taxed at $13.50 per proof gallon, while wine is taxed at $1.07, $1.57 or $3.15 a gallon, depending on alcohol content.

But in 1998, the California Legislature gave soju the same status as beer and wine. The state’s Alcoholic Beverage Control Act Section 23398.5 limits what can be sold as “soju” under the more permissive on-premise beer and wine liquor license. It can’t have more than 24 percent of alcohol by volume. That’s the basis of Koss’ tweet to Chappell.

Additionally, soju “wine” must be made in Korea, so there’s no such thing as an American soju. Even Ku soju, one of the most marketing-savvy soju brands, is imported from Korean liquor chaebol (conglomerate) Doosan.

California and New York both have large Korean-American communities and lobbied hard for the relaxed legal definition of soju. That allows Korean restaurants to sell soju without the bureaucratic burden of procuring a hard-liquor license first.

But there was a catch. Producers had to reduce the alcohol content in U.S.-bound bottles from 45 percent to 24 percent, just a little more than the kick of sweet, fortified wines such as Port.

After these laws passed, non-Korean restauranteurs discovered they could also take advantage of the loophole. In California, a hard-liquor permit can cost $6,000 to $12,000. To avoid those high costs, restauranteurs set their sights on soju as a less expensive alternative to jumping through all the hoop necessary to obtain a spirits license. They could sell cocktails made with soju instead of tequila or vodka.

Rather than “watered down,” U.S. soju’s lower alcohol content and lower caloric content of soju cocktails — about half the alcohol of vodka — is a marketable selling point for many bars and restaurants.

Keep in mind when you travel between the two countries. Several bottles of “American soju” don’t pack the same punch as the equivalent volume of Korean soju. Those two or three bottles of soju that leave you blissfully buzzed in L.A. might leave you puking your guts up on the sidewalks of Seoul.